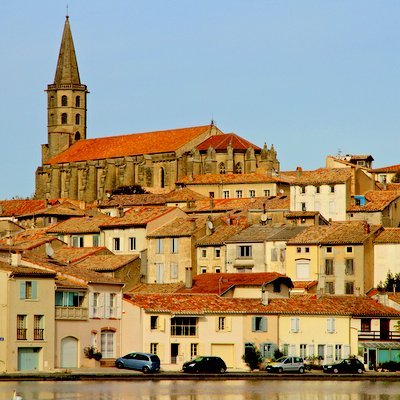 Living In A French Hilltop Village

When you realise that your love handles have got a bit too much love on them and no matter how hard you try, your pants just won't do up, that is when you know your minimal French lingo has got to include the phrase, "non merci", of course with the appropriate French accent. The drinking of local wine as if it is water, the stuffing of your face with every crust on a warm baguette whilst the just baked oven aroma assails your nostrils or sliding your tongue around a chocolate éclair to savour each mouthful of dripping squishy custard, has to come to an end - well, almost. 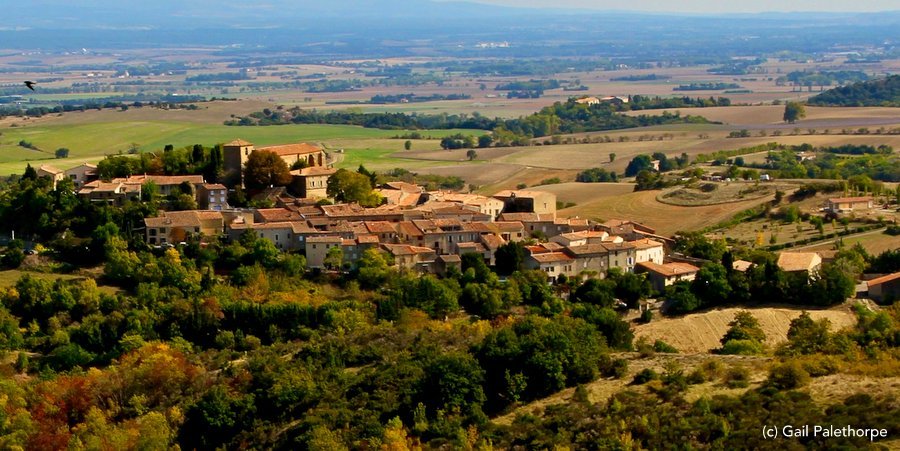 It is quite surreal living in a hilltop village in the vineyard soaked southern part of France surrounded by rolling swollen breasts of green hills that are at times burnt yellow turned earth dressed with vibrant red poppies, swathes of golden wheat or sunflowers en masse with their bright yellow faces basking in the direction of the sun.

The countryside roads are fringed with thousands of sycamore trees that Napoleon planted (at least his minions did at his beckoning) to give shade to his troops in the summer months and now give refuge to wild rabbit and deer running from the thugs with guns during hunting season.  These ancient tree avenues are being threatened with the chop due to the number of cars that seem to have a habit of running into their huge trunks; probably after the drivers have had a few too many anise flavored pastis under their belts.

Being a foreign invader in a quaint village where everything you had ever imagined it would be like, is true, is a unique experience especially when your linguistic skills of French is merely "petite peu" (a little bit).

The local village inhabitants vary from old to very old, complete with the village idiot, the one who bays at the full moon (he wakes me up), the "watcher" an old boy that hangs around the bridge leading into the village always puffing on a cigarette, a few retirees predominantly of the United Kingdom variety and plenty of stray cats.  Then during the summer months there is a further invasion of Parisians running to their summer retreats with or without rug rats in tow, plus a few more British bolting to their French "maison" for a few weeks holiday to breathe in the sweet soft breeze wafting for miles off the sea.  The bread van arrives blasting its horn at midday 3 days a week, whilst the fruit & veg man and the butcher only stop by once a week.

The village is about 8 kms away from the closest shopping area, so these purveyors of goods are doing the village a favour for those who don't have a car or don't wish to pedal on a bicycle into town.  You don't need to wear a watch as the church bells ring out the hour on the hour every hour with extra bells at 7am, midday and 7pm - I guess it could be translated to "get up, eat and go to bed".

This particular village was built in 1050 in the Languedoc-Roussillon wine region and historically at one point it was used as a hospital and outbuildings.  Similar villages hide along endless winding country lanes around the area, holding their echoes of long forgotten feet shuffling the boot worn cobblestones close, with the only displays of the village's historical significance in their cemeteries, small town squares and memorial plaques of the village sons that have died in wars.

A patchwork of red tiled roofs, textured and faded, sprout little impromptu gardens in their dips from where birds have dropped seeds amidst chimneys proudly reaching for the sky and in the winter spewing out smoke from roaring wooden fires.  There are crusty stones melding into walls rammed with earth, old brown doors framed by thick wooden beams in various degrees of repair that have danger splashed across them in black paint and broken windows form sightless eyes peering through crossbeams of hammered on slats. 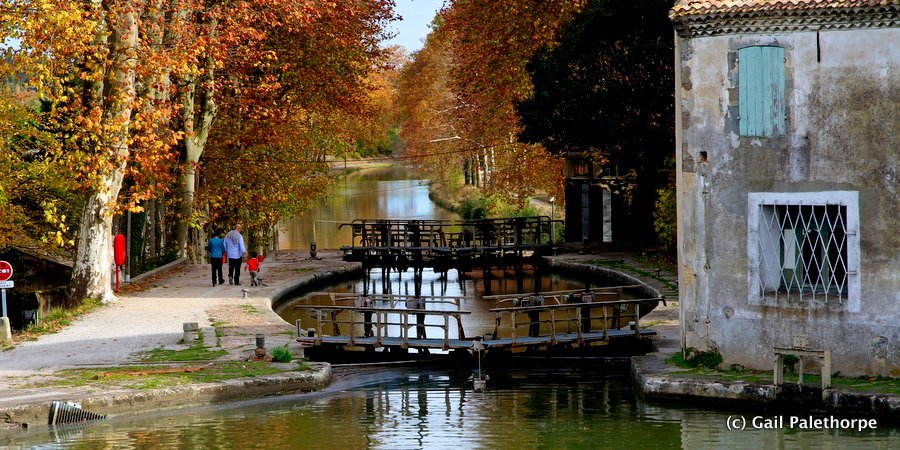 The village is a handyman's dream, as there are so many empty buildings that sit forlornly waiting for some fantasiser to come along.  The houses that have been done up are amazing.  Thick stonewalls keep the warmth in and withstand the violent ravaging black thundering storms during winter, whilst the hot stifling air is kept out in the summer when the stone walls bake in the sun of a brilliant blue sky with lazy puffed up white clouds. Bright blue or green shutters adorn the windows and terracotta pots sit on stonewalls with masses of lavender, bougainvillea and hydrangeas sprouting.  It's a rabbit warren of vegie plots, wide stairways forever leading up, where houses have their garages in a totally different area to where the house sits, even outdoor garden areas are not always beside the house they belong to.

The area is a Francophiles heaven as there are so many nearby villages to wander around especially when it is a market day (Revel is one of the best) when stalls are brimming with local vegetables and ripe cheeses or to stroll over the ground that Van Gogh and Gauguin once called home, the "Yellow House" in Aries; where he sliced off his own ear.  Dotted everywhere are ancient medieval Cathar castles shrouded in myths and legends including tales of the devil and buried treasure, there are walking trails everywhere and of course the famous "Canal du Midi" at your doorstep. 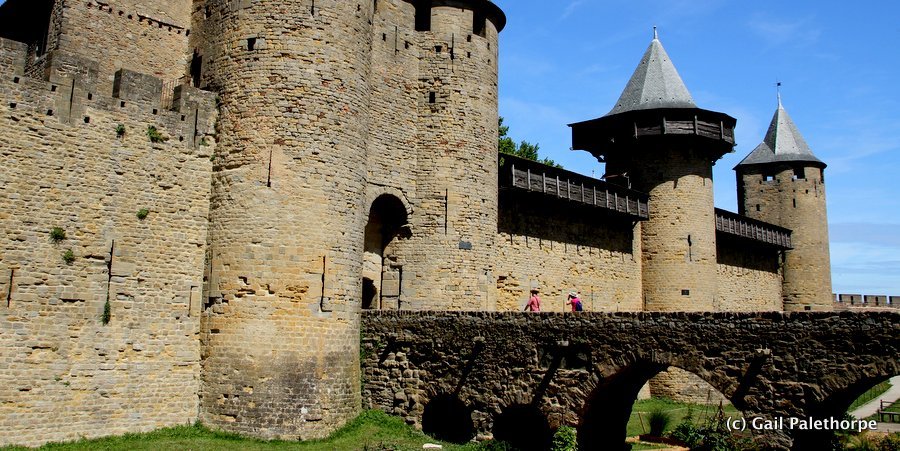 The incredible Pyrenees Mountains, whether cloaked in snow or dressed up in vibrant wildflowers, stand like sentinels in the background of the countryside hiding the tiny country of Andorra, cradled between Spain and France.  This is a tax free haven, where all the locals on both sides of the border run to for their duty free shopping (think predominantly nicotine and alcoholic spirits) and where for the French being able to buy succulent Spanish Parma ham by the bucket load, is a bonus.

I have now become the quiche queen (everyone makes them) and I have learnt how to do the Gallic shrug (twitch of the shoulders with eyebrows and open palms raised) accompanied by a "raspberry" noise. I have taken the French oath to regard lunch as sacrosanct for at least 2 hours and I am totally jealous of the men having scenic bathrooms wherever they are (peeing on the side of the road is a given).  I have learnt that prostitutes sit on the side of highways in the middle of nowhere (obviously for the relief of the truck drivers), that being a nicotine addict is not a crime, kissing upon meeting is a dire necessity and the French bureaucracy is overloaded with forms and more forms.

I just have to learn not to slurp my wine through a straw in the bottle - it might last longer and it isn't a very French attribute.

NB I have omitted the name of the village on purpose, because the inhabitants are not fictional characters and I don't want to be put in the stocks and have rotten fruit thrown at me.

What It's Like Travelling in Europe During the Pandemic

The best places in Europe to leaf peep this autumn