We all have them, us travellers that is - those moments when no matter how much you smile and wave your hands in the air - the language barrier cannot be overcome.

This is when you wish that you could simply open your mouth and one of a dozen languages that you miraculously know how to speak, will fit with the country that you just so happen to be in and you can jabber away like a local.  Ugh...if only this was the case. If upon arriving in a country where you don't speak the local lingo, you could be implanted with a microchip of the applicable language.

So there you are, a one dimensional English (or French or Spanish or whatever) speaker in a little town in the backwoods of Cambodia - that you never planned on being in anyway - wondering where to get a bus and what time it would come, when the only person to ask is an elderly coolie hatted bullock driver missing his front teeth and wearing a blank expression.

Or, you are in a restaurant in a small town in the Atlas Mountains of Morocco and despite being famished and no written menu to point at, you are unable to order what you want, due to the linguistic hurdle.  In desperation you think maybe one of the other tourists will speak your lingo and you end up yelling out at the top of your voice, "Does anyone speak English?"  Sadly you are all alone in your English verbal world, making an idiot of yourself and blushing beetroot red when you become the focus after trying so hard to blend in, with the locals.  You have to be desperate to pull that one, which I was recently.

Three enterprising young males have come up with a solution to this global language barrier problem, "Iconspeak".  Instead of relying on pen and paper to draw pictures, smiling whilst playing sign language or acting out charades, much to the amusement of those around you, the simple idea is t-shirts with numerous icons of everything a traveler could supposedly want printed on the front. They want the icon to be the rudimentary starting point from which you can elaborate with the fallback on hands, facial expressions and always playing charades.  As stated by these entrepreneurial boys, the shirt does not need to be recharged, updated with a new program or for some grotty slobs, you don't even need to wash it, if you are not inclined to.

In theory it is a directory of pictures so that you can point at the particular item you want, indicating your requirement and bridging the language barrier on a global scale in a simple form. Easy - except the t-shirt idea has morphed into carry bags, caps, beanies and tank tops for different situations:  diving (fish, snorkel and flippers), lumberjack (bear, tree and an axe), relax (bird, palm tree and the de rigueur cocktail glass with a straw), the world (OMG the icons are so small - there is a bicycle, motorbike, camera, bus, telephone and the list goes on) in cute little pictures printed on the front.

One must wonder if they have thought of how funny some impromptu reactions may be. Imagine a female pointing to the tap icon on her rather ample bosom in front of a Laos farmer.  He is more likely to be in awe of her breasts and not concerned about the icon at all.  Is she offering him a tasty sample of her protruding boobs, he may be wondering? Especially if she keeps poking herself in the tit to accentuate her "need". He may think offering your tits for milking to strangers is some weird foreign custom.

The same could apply to a t-shirt with an icon at crutch level; only that may be more confusing for both male and female. The bush icon had me laughing at the thought of a female pointing to that to find out where to get a bikini wax. The little icon of a person sitting on what could be a seat or a toilet may have the on-looker a tad confused, especially in countries where only "squatting" toilets are available. Maybe a squatting or standing stick figure spraying water may be more appropriate, if indeed it is an ablution area required and not a park bench to sit on. 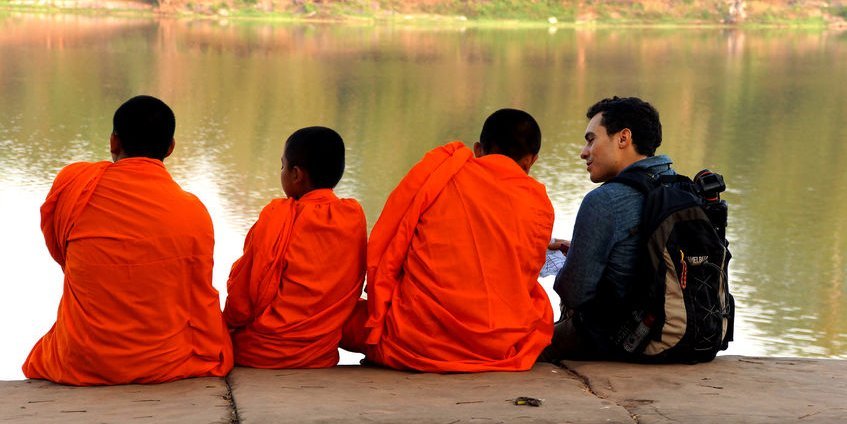 Shirt For All Occasions - Sort Of

In theory I applaud the effort, but from a female's perspective, you can tell it was a male that came up with the symbols.  The "diving" shirt has no icon for a beach, so hopefully you are already sitting on the sand when you wear this one.  The "safari" one left out the gun symbol for the despicable big white hunter, whilst the "relax" shirt has a double entendre, as it could be applicable to sitting on the beach or reclining in a palmeraie in the desert with a cocktail in hand watching the birds, so that is a bonus for the necessary cocktail hour. If you are wearing the lumberjack shirt, let's hope the bear doesn't eat you before you find an axe to cut down a tree for your nightly campfire.  Curiously there is no symbol for "shower", obviously the boys believe that this is an activity not required when traveling and why their website story is "from dirt to shirt".

As a monolingual fashion whore who happens to travel quite a bit, my only other observation of note is that the t-shirt styles leave a lot to be desired for a discerning female who likes to wear a funky shaped t-shirt instead of a generic "Bonds" look-a-like.  But the boys do get a round of applause for their innovative attempt at crossing language barriers: I just wish one of them had a dash of the flair of say Tom Ford or Coco Chanel.

11 Of The Strangest Travel Insurance Claims

What Do You Do In A Hotel Room?