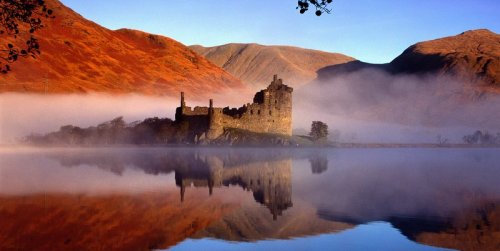 Hidden Castles in the United Kingdom

When exploring the United Kingdom, you expect to come across an array of ancient castles, both ruins and well preserved. Whichever part of the country you are visiting, you will be spoilt for choice with the amount of history on offer for viewing, with popular locations including the likes of Windsor Castle, Edinburgh Castle and Dover Castle. If you’re seeking a more unusual historic location, or simply want to get away from the crowds, discover our list of the top five hidden castles in the UK.

Located in the middle of a loch, surrounded by the mountains of the West Coast of Scotland, the remote ruins of Kilchurn Castle are unlike anything you have ever seen. About ninety minutes’ drive north of Glasgow, past the breath-taking scenery of Loch Lomund, you will discover the remains of this 13th Century castle perched on a rocky peninsula on the aptly named Loch Awe. Conjuring up visions of Game of Thrones, you can easily imagine battles being played out here.

On the complete opposite end of the spectrum, Ruthin Castle in Denbighshire, Wales, has been impeccably restored, now offering an unusual and grand alternative to a traditional hotel. The 13th Century castle was converted into modern accommodation in the 1960’s, and now offers luxurious hotel rooms, fine dining and a sumptuous spa. The perfect place for history buffs to get a taste of medieval life, expect sleigh beds, statues, chandeliers and tapestries.

There’s something romantic and quintessentially British about castle ruins, and the remains of Old Castle in Crom, situated on the shore of Upper Lough Erne in Northern Ireland, are no exception. Surrounded by ancient woodland, the ruins evoke memories of childhood stories and startling ghost stories. Close to the ruins, you will find a conjoined duo of Yew Trees, which have been traced back to 1739 and were the only trees in Northern Ireland to be included on the list of Greatest British Trees that marked the Queen’s Golden Jubilee.

Just south of Kendal, on the edge of the Lake District, Sizergh castle is perfectly located amongst rivers, orchards and woodland, showcasing an idyllic view of the English countryside. The estate is still used as a family home, and the landscaped gardens are a pleasure to stroll around. A visit to the castle is perhaps best tied in with a walk around the surrounding area, taking in views of both the Lake District and Yorkshire Dales National Parks, a magical pool, bluebell forests and a protected yew tree that has been linked to ancient pagan rituals.

Perched above the sandy beaches of Embleton Bay, the ruins of Dunstanburgh Castle are often deserted, making it the ideal destination for a secluded walk. Once one of the largest castles in Northern England, the ruins offer excellent views of the coastline and the opportunity to spot Kittiwakes flying around the nearby cliffs. Learn more about the history of the castle and surrounding area by partaking on the ghost walk, discovering the tales of the 16th Century knight that apparently haunts the ruins.

Hot For a Cool Trip to Chile