Why You Should Visit the Great Barrier Reef Now

On a bright clear day flying into any one of North Queensland's towns you will have a breathtaking view of azure, turquoise to cyan blue water dotted with opals shimmering in the Pacific Ocean.

This article is not about the raging controversy over bleaching, global warming or the war of political words, but a synopsis of reasons why you should put on flippers and a snorkel and go in search of Nemo or Dory, catch a ride on the East Australian current or laze on an island as migrating birds do. Caught between commercial realism and conservation alarmists, the Great Barrier Reef is a water playground, not just for the fishy creatures.

For how much longer this marvel will exist in light of pollution and sun bleaching, no one can agree.  Often considered to be "the canary in the mine shaft", the reef is believed to be an indicator of the planet's health.  That is the main reason why you should have the Great Barrier Reef on your dream list of places to run to in the next few years.

The Great Barrier Reef is the largest living structure on the planet stretching 2300 kilometres along north Queensland's coastline.  It is the world's largest coral reef ecosystem covering 344,400 square kilometres, with the Belize Reef off the Caribbean coast of Belize being the 2nd longest barrier reef and the Ningaloo Reef off the West Australian coast, the 3rd longest. The Great Barrier Reef covers roughly the same area as Japan, Italy, Germany or Malaysia and is slightly smaller than the entire Baltic Sea.  This iconic marine landscape is the only living thing on earth that can actually be seen from the moon, but boating tourists will only ever get to see about 7% of this World Heritage Listed area.

From 3000 varieties of molluscs to more than 100 species of jellyfish, 1625 types of fish to more than 30 species of whales and dolphins, add in 133 varieties of rays and sharks and you have an underwater hoi polloi, a kaleidoscope of vivid candy colours, sizes and shapes, living amidst the 600 types of soft and hard coral. From shallow estuarine coastlines to the deep blue ocean, turtles and crocodiles have also claimed this area since prehistoric times.

The Great Barrier Reef is one of the world's most complicated natural ecosystems with swaying sea anemone, cliff-hanging drop-offs into purple velvet depths and intricate coral architecture providing fairy-tale castles where some pretty bizarre creatures hang out in all their crazy glory.  You can come face to face with the friendly and inquisitive humphead maori wrasse's over-botoxed pumped-up lips, the ink spraying cuttlefish that can do disappearing tricks or gawk at the biggest jellyfish's tentacles that can grow up to 98 feet belonging to a lion's mane jelly.  There is the part-ray part-shark fish known as the white spotted guitarfish, with a skeleton of cartilage instead of bone that won't eat you despite its size and you can marvel at the graceful water ballet of a giant manta ray. 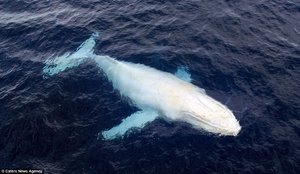 If you are extremely lucky you may run into "Migaloo" the white humpback whale that leisurely takes annual cruises along the coastline or the cute pygmy seahorse that will mate for life. If unlucky you will tread on a stonefish that is the most venomous fish in the world.  From sexually confused creatures such as giant clams, huge bivalve molluscs that are hermaphrodites, to blue marlin that begin life as a male and change to female when they reach the weight of 120 kgs, the Great Barrier Reef is a circus of the weird and wonderful.

The marine park includes about 3000 coral reefs, 300 coral cays, 150 inshore mangrove islands and some 600 continental islands.  You can swim, snorkel, scuba or sail this living watery landscape. There are plenty of ways to see the reef either flitting through the air on a scenic flight when you can check out the perfectly heart shaped "Heart Reef", hang out in the water off Langford Reef where 6 of the world's 7 species of marine turtles can be found, or stay a night or longer on one of the many island resorts such as Heron, Hayman, Lady Elliot, Hamilton or Lizard to name a few.  If you don't want to get your hair wet you can take a semi-submersible or a glass-bottomed boat tour and keep your feet out of the water.

With beautiful sun kissed golden beaches and peaceful lagoons where white-boats linger, it is no wonder that the Great Barrier Reef is 1 of the 7 wonders of the natural world.

8 Most Scenic Places to Visit in Bali