Did you know that the Northern Lights aren’t the only aurora visible on earth? If you’re based in or planning travels to the Southern Hemisphere, you could also catch a glimpse of colourful lights dancing in the sky. The Aurora Australis, also known as the Southern Lights, can be spotted during the winter months in certain spots in the most southerly places in the world. Here are six suggestions of places where you could watch them.

The South Island of New Zealand is one of the best places to potentially witness the Southern Lights. Head here between March and September for a chance of watching the spectacle, although you’ll have to head out into the wilderness to leave the light pollution far behind. Places such as Stewart Island, Lake Tekapo, Dunedin and The Catlins all offer clear dark skies for good chances of spotting the lights.

Tasmania is the most southerly point of Australia, so if you want to catch a glimpse of the Southern Lights, this is a great place to try. Isolated places such as Satellite Island, Mount Nelson and Mount Wellington are some of the best locations for aurora watching, thanks to the minimal light pollution in these areas. You’ll also get the chance to admire the spectacular landscapes and interesting wildlife of this beautiful island.

Located 400 miles off the coast of Argentina, the Falklands are one of the most southerly groups of islands in the world. You can spot the Southern Lights from almost anywhere on the islands and also admire incredible wildlife such as penguins and elephant seals. More and more tourists are visiting the islands as more routes to get there and more options for accommodation open up. 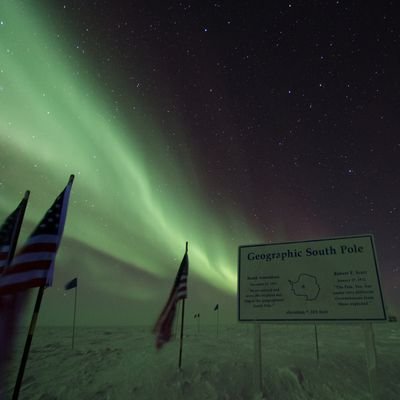 Antarctica is another southern region that is fast becoming more popular with travellers. One of the most untouched places on earth, it is one of the wildest areas in the planet, as well as being the very best place to spot the Southern Lights thanks to its southerly location and almost complete lack of light pollution. The only downsides to watching the Southern Lights from Antarctica are that it is very expensive to visit, and there aren’t many options for tourists. Your best bet is to book on a cruise at the end of the seasonal run, in March or April.

If you want to try to see the Aurora on mainland Australia, Victoria is your best option. The southern Australian state is a great place to watch the lights during periods of high activity, thanks to its large expanses without light pollution. Head as far south as possible for your best chances of spotting the lights, setting up camp on the beach for a once-in-a-lifetime viewing.

Whether you’re visiting South Georgia Island in the Atlantic Ocean for its wildlife, scenery or the chance to spot the Aurora, it is sure to be an incredible trip. One of the most southernmost islands on the planet, there are no permanent residents living here, with almost no light pollution making it a perfect viewing spot for the Southern Lights. Most cruises will end in March or early April due to unpredictable winter weather conditions, so book onto one of the last cruises of the season for your best chances.

Museums and Galleries Open Around the World

Where To Visit For Amazing Architecture

Wild Animals to Spot on the U.S. West Coast