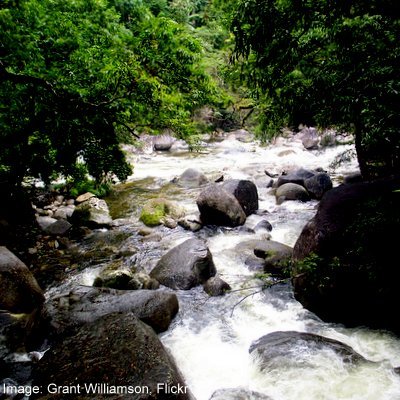 I am not talking about the legendary Greek hero "Odysseus" that was known to the Romans as "Ulysses", but about the stunning large swallowtail butterfly often referred to as the "blue emperor" that is the iconic image for Queensland tourism. Distinctive and unique, an Aboriginal myth has a beautiful tale of their creation and their friendship with cockatoos.

The Daintree-Cape Tribulation region sits north of Cairns and the village of Port Douglas in the far north of Queensland. The symbolic phrase "where the rainforest meets the sea" rings out, as it's literally where the Wet Tropics rainforest has its roots, reaching into the aquamarine waters of the Great Barrier Reef. A part of the oldest surviving tropical rainforest in the world, this is where two UNESCO World Heritage sites entwine.

Self-drive or take a tour of this achingly beautiful lush landscape that was the inspiration for the Hollywood movie "Avatar". There are plenty of tours on offer to take you exploring, or it's easy to hire a car and do-it-yourself. Here, in one of the most complex ecosystems on the planet, you will be crossing creeks, meandering beneath deep green canopies, and sauntering along sandy white beaches where offshore reefs sit in the crystal clear water.

Take a walk on the wild side (night or day) and have a flora fix while following boardwalks through the dense rainforest where dragon lizards lurk, possums scurry, and spiders spin their webs of silk. You will stumble across gushing waterfalls cascading into rock pools. The must-do spots include Mossman Gorge, the Daintree River and Cassowary Falls either with or without an audio guide that you can hire from the Daintree Discovery Centre or an actual person if you don't want buds in your ears. There is even an 11m-high aerial walkway to navigate, where you can hang out in a 23m-tall tower taking it all in.

River cruises traversing the Daintree River will give you the opportunity to take plenty of selfies, with or without a crocodile smiling in the background. For those into catching their own dinner, lure fishing will produce the infamous barramundi, trevally, queenfish and mangrove jacks to test your prowess.

Have an adrenalin rush on two wheels of a high-powered mountain bike through trails of dense of rainforest and end up at Mason's Swimming Hole for a refreshing dip. 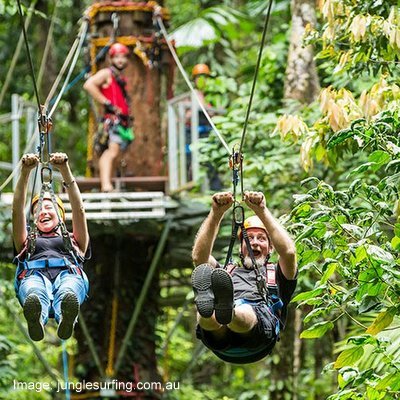 Jungle surfing will get the heart rate pumping with excitement as you zip line amidst the jungle canopy, leaving no footprints behind and get to play with the flying insects. (Jungle Surfing Canopy Tours)

Chat to the locals of the animal variety that call the Daintree home and won't be found anywhere else in the world. If you are lucky, you will get to see the majesty of a dangerous cassowary—flitting colourful birds represent more than half of the bird species of the entire country (think 430 different species)—and the shy platypus or echidna may be hiding from your prying eyes. Possums, water rats, wallabies and kangaroos all inhabit the area, while more than 54 native frog species create a cacophony that resonates. The earth smells damp, the foliage is vivid hues of green, and a plethora of beetles, bugs and insects surreptitiously dine on huge leaves in camouflage mode. Skinks, snakes and huge lizards scurry on the rainforest floor, while the predatory ancient crocodile stealthily lurks in swimming holes and the Daintree River and trawls along the ocean's edge.

Ancient rock pools and gushing waterfalls provide cool-off moments of the frigid freezing kind. Don't be tempted to jump into the Daintree River, as you will be entering the feeding ground of the crocodiles. Depending on the time of the year, if you wish to dip your toes in the ocean, be aware that nasty stingers hang around.

Grab an ice-cream either heading up or coming back at the Daintree Ice Cream Co.  Made from home-grown exotic fruit such as mango, jackfruit or banana, you won't be able to lick fast enough to stop the dribbles.

For the real Daintree experience, when you can learn about the indigenous history and immerse yourself in the timeless beauty of the land, take a tour with the traditional owners, the Kuku Yalanji people from the Mossman Gorge Centre, or check out this site for what appeals:

10 Amazing National Parks in the U.K.

Six British Seaside Towns to Visit All Year Round