Did You Forget Your 747 In Malaysia? 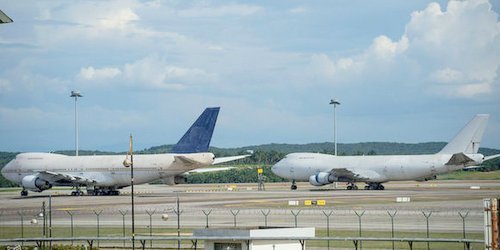 This week reports from the likes of CNN reported (original report) that Malaysia is hunting the owners of not 1 but 3 fairly conspicuously large 747-200’s that appear to have been left unattended for some time.

According to the report and an official newspaper notice the aircraft seem to have been abandoned at Malaysia’s Kuala Lumpur International Airport and no one knows who actually owns them.

Reports suggest the last known owners of the aircraft were Air Atlanta Icelandic, who claim to have sold them in 2008, after which ownership records appear sketchy at best.

The report plays up the fact that there is plenty of space for the aircraft at the airport, but fails to highlight what should be the first question “how the planes got to the airport in the first place”?

Would it not be a fair assumption that these planes were flown in from somewhere by someone?

Are there not some international procedures that call for all aircraft arriving and departing major international airports to have some documentation, such as a place of origin, cargo and or passenger information or manifests, insurance papers – anything?  At least some record by air traffic control. So where are these records for these aircraft?  Surely there must be a way to track the ownership of a huge multi million dollar aircraft (let alone 3) that requires regular maintenance and safety checks by Boeing themselves, no?  It is difficult to imagine someone just deciding to land this size of aircraft at an airport, 3 times mind you, without someone noticing.

Not to mention the question of who just dumps what must amount to 10 of millions of dollars of wide-body jet?

Without going down the somewhat obvious, but probably in poor taste, linking of loosing an aircraft and now effectively finding 3 other aircraft, Malaysia really can’t stay out of the airline industry news for a little bit of left field content.