Buenos Aires, gritty and graffiti-clad, takes a while to get to know if you are merely bumbling your way around its narrow alleys and streets—some are 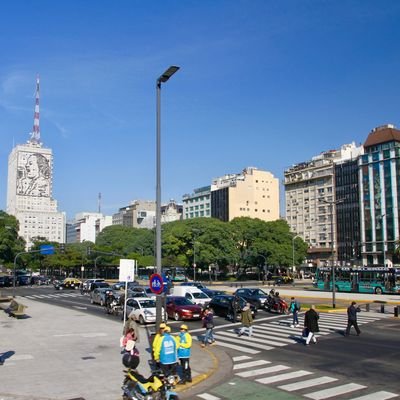 pebble stoned in the old barrios, while others are vast modern multi-lane and traffic congested. If you want to get the quick fix of the layout of the city in a few hours, then jump onto the Tourist Bus. You can orientate yourself concerning its main landmarks and the colourful uniqueness of its various barrios without wearing out your shoe leather.

Everyone on the bus gets their own earpiece to plug into the information that is blurted out in ten languages from the audio guide, so you know exactly where you are and what you are seeing. With titbits of historical information thrown in, the audioguide is only one part of the experience. What you see is the other part.

No one sits downstairs unless it's raining, so take the leap upstairs and sit with your head bobbing along like a chook being strung up. For the camera buff, it's perfect if the bus is not full, as you can jump from one side of the bus to the other to get the best shots, albeit you will have to be quick. If a particular area piques your interest, such as one of the many museums, or if you are in dire need of a quick caffeine fix, then you can get off knowing that there will be another bus along in about 20 minutes to clamber back on.

In total there are 33 stops if you take in the full journey through historical districts such as Monserrate, La Boca and San Telmo. Gentrified areas include Puerto Madero, lush parks and the buzzing squares of Recoleta and Palermo. Depending on what route you take, you will whizz past the spot for football, Bombonera stadium that can seat 49,000 adoring fans with its surrounding eccentric shop fronts displaying everything to do with "fútbol".

The palatial mansion "Casa de Gobierno" (aka Casa Rosada) where the President of Argentina hangs out occasionally will catch your eye, while the graffiti-decorated buildings showing off the local artistic skills and emotions of the people of Buenos Aires in a crude but picturesque way will flash by. Rowdy gatherings hog roads with lots of music and yelling happening. Quirky red post boxes litter the streets decorated with visible signs for those that can't speak Spanish. 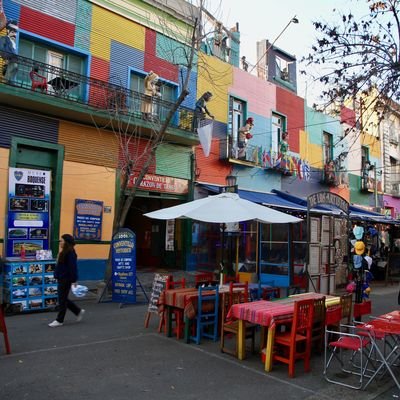 e beautiful architecture of the aristocratic type will display its wealth in Avenida Alvear (Recoleta), while bohemia reigns in San Telmo, where the Sunday markets will put you elbow-to-elbow with your fellow human. Huge old silos stand beside shiny new towers reflecting other buildings on their glass faces.

La Boca has become a tourist playground of in-your-face novelty that tends to overshadow its bright, colourful houses, as your eyes won't know where to focus first.  From caricatures hanging off rooftops or out of windows, outdoor cafes swallowing up the pedestrian-only roadways and touts stepping in front of you to have a coffee in the cafe behind them, it's a tacky parody of what you want to see in Buenos Aires.

Busing around the city will give you an insight into the people of Buenos Aires from the local traffic police who struggle to bring order to the overwhelming number of vehicles on the roads to the super long queues of people waiting at bus stops. The city of tango has many ad hoc performers strutting their dancing steps in the streets.  Dog walkers hog footpaths with about eight dogs in tow, the homeless find nooks to sleep in until midday, and the streets are empty until about the 10am mark, which is no surprise considering that the locals eat at 9pm and don't go to bed before 1 or 2am.

Buenos Aires is colourful—it's a mix of European flair with Argentinian character.  Every time the bus stops, you will have the opportunity to look at another aspect of this fascinating city.

Where to jump on:

If you want to start at the beginning, head to Stop 0 that is near the Tourism Office where you can buy a ticket: Diagonal Norte, Av. Pres. Roque Saenz Peña 728.

The validity of tickets:

Choice of a 24-hour or a 48-hour ticket is available. You can book online.

When do the buses run:

How to plan more ethical travels