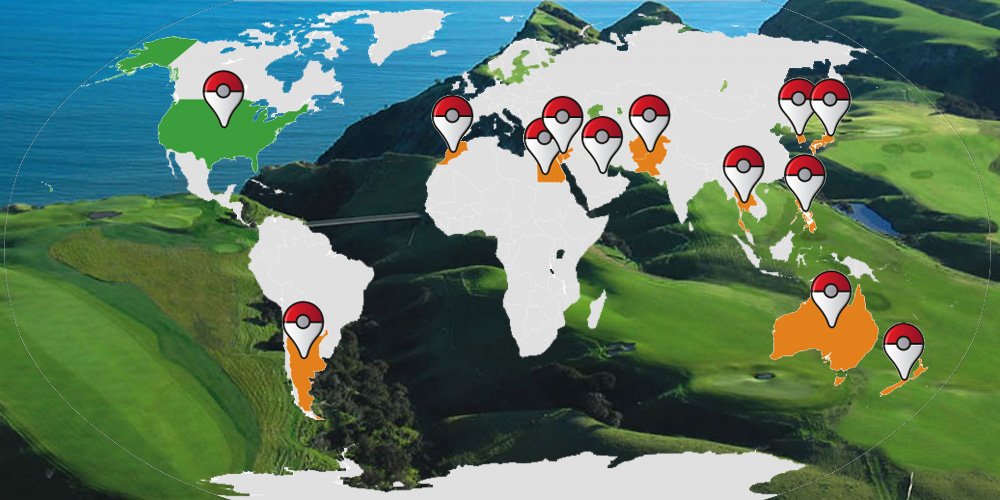 The elusive unicorn start-up venture that is now worth billions and has the world chasing quirky creatures with even quirkier names on their mobile phones has the travel industry sitting up and taking notice, not just for the candies and stardust or an elusive wild Pokémon to catch.  Pokémon Go may just be the next addition to everyone's travel app collection.

amers of this wonder are no longer the geeks hunched over their computer all hours of the day and night in total physical isolation.  Niantic's (out of Japan of course) real world gaming platform combining mobile location technology and augmented reality, encourages people to get off their rear ends and to go outside in the world to play and mingle in person with sympathetic searching soul-mates.

Its hard to catch these little rascals with some only being found in their native environments, such as a water-type Pokémon will only appear near oceans or lakes...Thailand here I come.  Some of these dastardly little critters can only be found in certain countries creating a global village of seekers.  The game will have you hatching Pokémon eggs to wanting extra Poké Balls that can only be acquired at PokéStops in real world locations - museums, art galleries and historical landmarks around the world. This is a branding business dream, not only enthralling the kids of the world, but also capturing the minds of playful adults.

The global phenomenon is credited with promoting physical activity (you have to travel to play) and helping local businesses in many different international cities to grow, despite being criticized for contributing to accidents because of human noses being squished against mobile phone screens (think walking in front of cars and falling over cliffs) to creating public nuisance scenarios, with some countries even passing legislation about its use and banning Poké fanatics from certain "sensitive" places.

Downloaded more than 100 million times, there is sure to be a number of those in the compulsive obsessive ilk whose mantra is "gotta catch them all", hence travel via foot, car, plane even donkey, is the only way to achieve it.  Aficionados or pokémaniacs organise meetups for community quests to catch the roaming cute creatures en masse in the company of their new best friends.  In reality the game is a city guide and exploration tool, if you can manage to take your eyes away from the screen for more than a moment.

Frequent travellers or global wanderers have an advantage, as the more internationally mobile you are, the more chance you have of success in catching a critter at the Eiffel Tower, or any other must see tourist attraction that is a PokéStop.  With so many world players, you will definitely run into another Pokéfreak in the vicinity, giving you the chance to start a conversation and glean some local knowledge of where the best place is to have a drink or two.

It could even be the next pick-up line for the love hungry traveller:

"Do you want to come into the woods with me and catch Aerodactyl or Pidgey?"

You murmur to the stunning body beside you.

Of course you are in the disguise of a Pokémon master, as the critters you have named are flying Pokémon that can only be found in wild natural areas.

Initially it was bars and cafes on the receiving end of swarming gamers when businesses paid for "lures" to get the frenzy gathering spot happening, now there is a whole Pokémon tourism fad happening.  Cities are selling themselves based on how many Pokémonstops and Pokémongyms they have in situ, tour guide entrepreneurs give those who like to follow the bobbing flag (tourists) the chance to hunt for the rare monsters, whilst hotels are selling beds based on the fact that gamers do not have to leave their beds to catch a passing critter.  Some diehard Pokéfans (real business men that caught the disease off their children) are adapting travel plans to fit in with their game playing and what beast they wish to catch in what country.

Pokémon Go has so many real locations as virtual ones that it could be the ultimate aid for road warriors, think along the lines of a virtual assistant who will never get you lost in a strange city. Applico, Marriott International and Expedia got together to give a free trip to one lucky Pokémon soul so that he could catch Mr. Mime in Europe, Farfetch’d in Asia, and Kangaskhan in Australia.

Pokémon is proving to be an innovative and lucrative marketing tool for the travel industry as a whole, not just a mobile gaming app.

5 Top destinations for Pokémon Go fanatics to hang out.

New Zealand - They even have their own live Snapchat account at PokémonGoNZ for gamers to put up selfies.

Australia - you can kayak around Sydney harbor to chase a water creature.

Netherlands - head to Zuiderpark in The Hague, which is now nicknamed "Pikachu Park".

Staying Connected On The Road