How is Singapore National Day celebrated?

Singaporeans get into celebratory mode as early as July and it continues through to the 9th August, when there is a National Day Parade that is nationally televised, an address by the prime minister of Singapore and plenty of fireworks going off. During this time there are concerts, carnivals and plenty of other celebrations happening.

Singaporean red and white flags hang from buildings, flutter on cars and drape homes in a colourful display of pride and unity, con 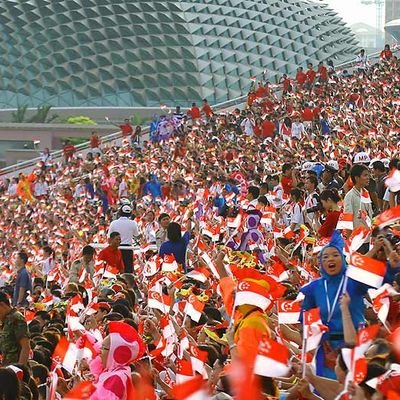 sidering the many different cultures that make up Singapore. Cultural groups, school choirs, lion dance groups and scout and girl guide groups all get out and have fun.

The National Day parade is a military parade (33 marching contingents, the combined Schools Choir and the largest combined Military Tattoo performance) bringing together over 2,600 participants from all walks of life, representing the unity of its people. The cacophony increases when parachutes are in the sky, there is a presidential gun salute and a national flag fly-by. This is followed by the mass singing of national songs (in four languages), a national pledge taking, a dynamic show, and then the fireworks go off with a huge colourful bang. You have to apply for tickets to see the parade, which are on a ballot system for the locals. Entertainment on the day begins long before the parade to encourage ticket holders to take their seats early when goodie bags are handed out.

Brilliant views of the festive shenanigans can be had from the "Singapore Flyer" that towers 165 meters above the ground or on the Marina Barra where the lights of the city play on the still waters.
The Culture of Singapore

Throw together the cultures of Malay, South Asian, East Asian, and Eurasian cultures and you have the culture of Singapore, where "East meets West".

For foreigners visiting Singapore for the first time there are a few golden rules:

As Singapore sits near the Equator, it typically has two seasons, wet and dry.  The dry season is usually from March to August, and the wet season is from September to February. temperature is fairly consistent averaging between 25 and 31 celcius throughout the year.  The major variance during the year will be rainfall and humidity.

Holiday known is as

Try these easy eats  in Singapore.

Public transport does not close down for any public holidays; in fact, there will be extended operation hours to cater to the requirements of the people.

8 Ways to Make Money as a Digital Nomad

How Is Brexit Going to Affect My Travels?