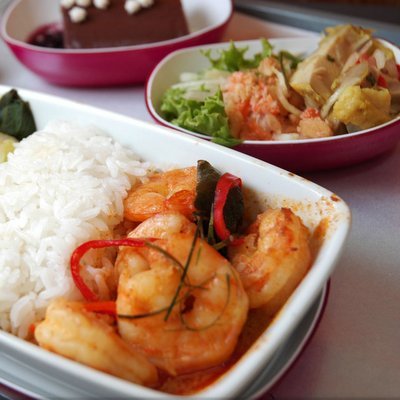 Did you know your taste buds fly out the window when you get on a plane?

Apparently it is not only you that packs your bags and take off on holiday when you jump on board a plane. Your taste buds in fact go AWOL and leave you in a state of "ageusia" whilst you are zooming through the fluffy white clouds.  The airlines are doing everything in their power via the food and wine served to you sky high to tempt your pallet to stranglehold the little suckers, so that you are not complaining about bland food and off wine being served.

Why does it happen?

Food and wine flavor is a combination of your sense of smell and your taste buds in action.  Lock yourself into a pressurized cabin thousands of feet up in the air and the sense of saltiness and sweetness drop dramatically due to the lack of humidity, background noise, the low air pressure and even your total in-flight experience can put a dampener on your taste buds.

The humidity in a plane is less than 12%, which is drier than most deserts are; hence there goes your sense of smell. Combine this dryness with low cabin pressure and it reduces your ability to taste sweet or salty foods by approximately 30%.  Then throw in the constant engine noise and seat vibrations; noise is another prime factor to taste buds fleeing. This all adds up to not being the ideal scenario for enjoying a meal.  Once you factor in the squishy seats, neighbors' elbows, bad breath or the child ejecting their lungs in front of you and it is ten times worse.  Unless of course, you are in the pointy end of the plane with ear plugs in and reclining comfortably spread out like immortal gods in the lap of luxury.

What tastes don't flee the skies?

For some unknown reason by the gods of physics, sour, bitter and spicy flavors stay with us, plus seasonings such as lemon grass, curry and cardamom taste more intense than salt or sugar.  The savory tastes of foods such as sardines, mushrooms, seaweed, spinach, shellfish, soy sauce and tomatoes that affect our so-called fifth taste, "unami" (think Japanese cuisine), also don't run away when in the air. The unami flavor is believed to be enhanced when accompanied by loud background noise, as it has its own receptor on our tongues. When eaten it titillates our tongues, making the food taste delicious.

Much of what we taste with each mouthful is in fact the smell wafting up our vacuuming snouts. When flying, the mucus membranes in the receptors of our proboscis' go on strike, due to the dry air making the food taste super bland.

Bring on the extra pinch, dash or splash of vibrant flavors and spices, with an extra hefty kick of salt, more than a grounded restaurant would ever dream of doing.  The airline caterers even go so far as to do a simulated environment when creating and tasting the menu proposed for in-flight service. One must wonder if they have the screaming child in-situ, along with the annoying dribbling co-passenger?

The inventive and iconic British chef, Heston Blumenthal, came up with the idea of handing out nasal sprays before meals were to be partaken of, like giving out party favors to those in "indulgent" class. This pre-dinner personal hooter ablution in public idea didn't go over too well with the elegant Armani clad groupies, so it was never continued.

Alcohol in the Air?

Yes, it affects the taste of alcohol.  A Bloody Mary or two will actually taste better in the air with less acidity hitting your palate, but wine is another story.  The wines that wow you when your feet are firmly on the ground, depending on the style, may leave you in total despair in the air. Fruity wines will take on a thin, tannic and acidic taste as the mid-palate changes, just like the cabin pressure changes.

Apparently it is better to scoff a few wines at the beginning of a flight, rather than towards the end when you have a dose of "cotton mouth" (less effective taste buds) from drying out in the rarified cabin air. The champers won't taste as good, due to its high acid content and neither will the Claret or the Bordeaux. Whilst your favorite Chablis may turn to lemon juice.

Airlines take great care with their wines on wings, choosing full-bodied fruit bombs to bombard your taste buds.  As one airline sommelier said in relation to the wines chosen for in-flight service, "Subtlety is not well served at altitude".

Remember your taste buds and sense of smell would have been left behind at the departure gate and order an extra Bloody Mary, because if you can smell the bad body odor of the person beside you, it is definitely nasty.

Is it Safe to Fly During the Pandemic?

The ABCs of Virtual Wine Tasting

Where to Store Your Luggage: LuggageHero to the Rescue