The stark white peaks of the Himalayas soared into the sky in almost every direction one looked whilst eagles soared, cameras clicked and legs ached from the arduous walk up to the peak of Sarangkot. I had arrived at one of the many lookout points within the vicinity of the town of Pokhara as a pillion passenger on a motorbike, with a local guide in tow, Amrit.

The ride up to this point was a mind boggling exercise of racing along an expansive roadway dodging rustic trucks, cars and other motor bikes to then gliding in a zigzag fashion up and up the pot holed road to an elevation of about 1700mts. The roadside was flush with washing draped on rustic houses clinging to the cliff edges and paddy fields going off into the distance.

I had to cling to Amrit with each hairy bend we encountered and each pothole that threatened to engulf the bike as we avoided the odd stray meandering cow on the side of the road. It was exhilarating and adrenalin pumping, with most tourists opting for the more sedate alternative of taking a taxi. 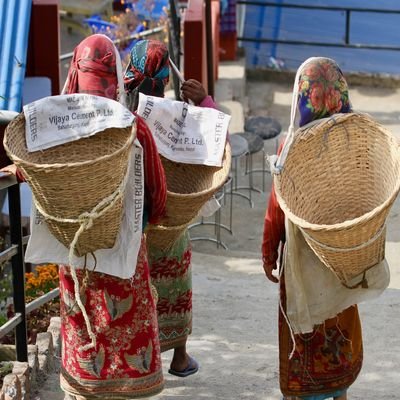 giri, the sacred mountain of Machhapuchare and awesome views of the Pokhara Valley.This is from where adrenalin junkies take to the skies paragliding with only eagles for company, where the local village women struggle up far too many steps to count with bricks in woven baskets hung from their foreheads to a construction site and where partaking of Himalayan coffee on the way back down takes on a whole new meaning.

Scooting away from this magical sight on a downhill run, the next stop was the temple Bhindhyabasini Mandir back in the old bazaar area of Pokhara, as we were making our way from one side of the town to the other. Devoted to the Hindu goddess Durga, who happens to have a very bloodthirsty side to her personality, the temple grounds wafted incense and burning candles, and cow figures were brushed in red dye. Awash in locals worshipping, it's set in a lush garden on a hilltop, so there were more stairs to climb.

The old town is in stark contrast to the tourist haunts around Lake Phewa. Almost deserted, the odd shophouse had a smattering of locals hanging out gossiping on doorsteps of intricately carved Newari style buildings that were crying out to be restored. This was the bustling trading heart of Pokhara about 300 years ago, as Newar traders traipsed along the main trading route between Tibet and Kathmandu.  One almost feels like they have stepped into a time warp when going through its wide predominantly abandoned streets with a sleepy air, as everything appears to be closed.

Amrit and I arrived in a cloud of buzzing tourists to the colorful canopied boats bobbing in Phewa Lake dotting the water like confetti around the Barahi Temple that appears to be a mystical floating island. Silence reigns on this tiny slice of land, where the two-story pagoda is dedicated to Ajima, the boar manifestation and protectress of the female force of Shakti. Blood is spilt here on Saturdays, as devotees sacrifice male animals that have been ferried across the lake.

Another jaunt on the motorbike along a main highway on the way to Tansen—with the odd interruption of buses and cars almost cleaving each other open—had us gawking at the gushing flow of Devi's Fall and negotiating the de rigueur souvenir stalls that appear at any tourist site. In this dusty town of multitudes on the opposite side of the roadway is the Gupteshwor Mahadev Cave that houses an ancient temple of Shiva. It's hidden through a low tunnel behind the shrine that emerges into a cavern with the thundering roar of the waters of Devi's Falls invading this claustrophobic space, which floods every year during the monsoon season.

The World Peace Temple perched on the opposite mountain to that of Sarangkot was next on the list of must-do tourist sights. This glaringly white pagoda-style temple sits proudly on top of Ananda Hill and yes; 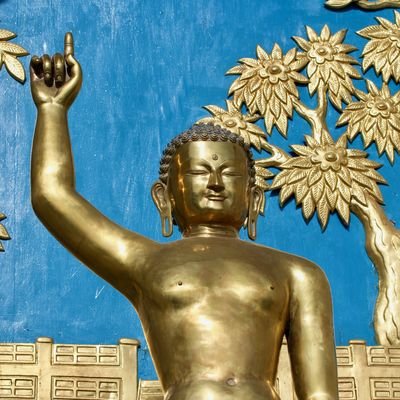 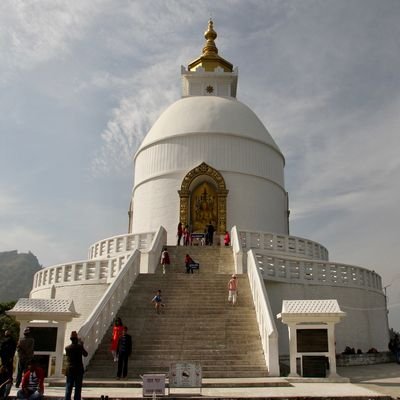 another arduous stepping exercise that will burn your leg muscles if you are a bit on the unfit side. For those that come by bus, it's even more torture, as the buses have to stop right down the bottom of the somewhat twisty narrow roadway, leaving these hapless souls with no alternative but to walk up in the heat to 1,000mts.

Built in 1996, the World Peace Temple gives awesome views across Lake Phewa to Sarangkot Mountain, with the ghostly apparitions of the Himalayan Mountains forever in the background. If you are into a bit of hiking, it's possible to trek for two hours from Pokhara Damside through the forest, down to Phewa Lake and along the Stupa Walkway. Built by Buddhist monks, it represents the four prominent stages of Buddha's life in four directions: where he was born "Lumbini", where he became enlightened "Bothgaya", where he taught most of his life "Sarnath", and where he reached nirvana at Kushi Nagar. Standing 1,100 meters on the hilltop in Pumdi Bhumdi, the serenity of the moment is slightly tarnished by photo snapping youth intent on taking selfies.

The day came to a picturesque end at Begnas Lake, where reflections dazzled of local fishermen, and locals hired pedal boats to cruise the lake's surreal surface. A freshwater lake like a jewel set in a lush garden, it's the third largest lake in Nepal.  For some unknown reason, this is where you can totally escape the tourist hordes, as hardly any foreigners visit this water-land wonder.

The Best Islands to Visit Off the Coast of the U.K