There are times when you really don't care how much you pay; all you want is to get to where you are going.  But there are other times when it all becomes a bit much, especially when you realize that the tuk tuk drivers are taking you for a ride literally, via your wallet.

I have seen dear little old local ladies helped into a tuk tuk by the driver; mum loaded up with boisterous kids and numerous colorful plastic bags all stuffed into the rear of a tuk tuk, obviously being driven by dad, as one of the kids will be draped over his shoulder virtually driving it with him, and tourists loaded up with backpacks until it appears that someone will fall out of the back.  They buzz in front of you, around you and behind you, somewhat similar to being attacked by a horde of mosquitoes. 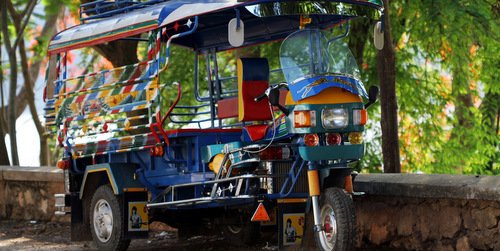 In Vientiane tuk tuk conventions are held on every street corner where they gather in large numbers, chatting together or sleeping in hammocks strung up across the inside of their vehicles.   Prices are cleverly written down on plastic coated sheets for the various sights around town, giving them an air of authenticity and maybe an agreed upon price for all of the tuk tuk drivers.  But, all it takes is for you to walk away from negotiations. The price will immediately drop to a more reasonable amount when they realize, you won't pay the exorbitant amount that they want to leach out of you. Of course, the more people there are, the more they feel they are justified in charging.

I declined the tuk tuk challenge when I first crossed over the border from Nong Khai in Thailand via The Friendship Bridge into Vientiane in Laos, in favour of the lure of a ride in a brand new taxi with a young Laotian fellow named Vong.  I was to be entertained with not only a quick lesson in Laos but a sight seeing trip as well.  Yes I know, he was angling to get me for a day trip, but this was not to be the case.  Vong was so proud to have bought his very first vehicle after having been driving for someone else for several years.  The normal negotiation had already taken place with Vong and the price had dropped from 800tb to 400tb, just to get me in his vehicle as his first passenger.

Armed with my new language skills of being able to say hello "sa bai de (der)”, goodbye "laa gawn (der)" and of course to be polite, thank you "khawp jai (der)", I was ready to enter the chaotic fray of Laos. 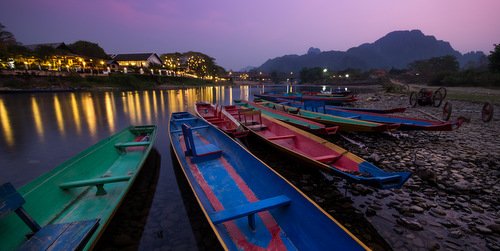 The next day I decided a bit of sight seeing was in order and decided to investigate what the Great Sacred Stupa, the "Pha That Luang" was all about.  After walking around the corner from the hotel to the tuk tuk gathering, I was soon pounced upon by three punters angling for my business.  One driver in particular put on the charm. After serious money talk of what he wanted versus what was on his "plastic advertised prices", and what I was prepared to pay, the consensus came to 40,000 kip. He said he would wait and take me back for 50,000, which I agreed to.  I was taking into consideration that I had just been left stranded at another tourist attraction in Nong Khai, having to wait for an hour for a tuk tuk to take me back to my hotel in pouring rain, I erred on the side of caution.

Everything was fine until we stopped at the “Laos' Arc de Triumph” on the return journey. Talk about a Jekyll and Hyde transformation of the tuk tuk variety, Mr. Hyde suddenly appeared and he turned to me and demanded 70,000 kip.  Now I know we are not talking much in relative terms, but an agreement is an agreement.  I actually thought that if I had not been alone, he probably would not have tried it on and definitely not stomped on me as Mr Hyde of the storyline, would have. I mused to myself that obviously his poor wife would not be in the "loving category", if this was his attitude to women.  I decided he would not chance attacking a female tourist and to call his bluff.  I gave him the original agreed amount and promptly got out in a huff with a backhanded comment that I would not dare to utter again. I am totally amazed at my capacity of blue language when appropriately called for.

I went back across the border to Nong Khai several days later, after having the price negotiated for me by the manager at the hotel where I was staying for the trip from the hotel to the border. It must be part of management school in Laos to learn tuk tuk negotiation skills, as he got the price down from 100,000 kip to 75,000 kip.  No such luck on the Thai side of the border as it was back into the fray of battleground tactics to arrange for a lift to my hotel in Nong Khai. 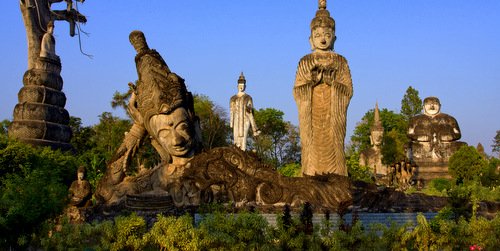 I had the misfortune to be tackled by a driver who wanted 200tb for the trip, to which request I laughed and said that it had only cost me 60tb for the original trip.  His snarling reply was, "Well you pay double to go back!" I could have stood and debated his lack of mathematical prowess, but decided my day had been long enough already.  I offered to pay 100tb, to which he said that I would have to wait for some more people, as he wouldn't take me for that price considering I was alone.  I walked off and another driver approached me.  This driver agreed to take me for 100tb and began to take my bag off me when the first driver came screaming back like a whirling dervish. The disgruntled first fellow promptly snatched my bag off this guy and yelled at me to follow him, as he would take me straight away. Upon arrival at the hotel he turned to me and asked for 200tb!  I gave him the filthiest glare that I could muster, stuffed a 100tb note in his hand and told him that he was not getting another baht out of me.  At this point, by some miracle, the receptionist of the hotel walked past and said hello to me in Thai.  The look on the drivers face was one of horror, as he realized that he had just done the wrong thing. I was not some first time tourist that had tried to spin him a yarn about knowing the correct price.

The border town tuk tuk drivers are hereby on notice that they are being challenged as to their pricing creativity, by a driver that I encountered in Vang Vieng in Laos.  I got off the mini van with no idea where my hotel was located in relation to where the van had stopped.  Unfortunately, this was not a door-to-door service that took the passengers direct to their hotels.  I showed a tuk tuk driver a piece of paper with the name of the hotel on it and in between very sparse English words, he nodded that he knew exactly where it was. He wanted to get paid up front and I jokingly said is that because we are only going around the block, to which I got no reply.

I jumped in anyway and we promptly went around the block and stopped across the road a few doors up from where we had started. I could have walked!  But then again, I would have had to carry my bag.

Did you know these 17 Shocking Facts About Thailand?