6 Movies Not To Watch Before Flying

Getting on a plane for some people may be a bit nerve wracking. If you belong in this category, here are my top 6 movies that you definitely should not partake of watching prior to boarding your flight. If by some chance you are outvoted by enthusiastic movie watchers who wish to scare the hell out of you, a couple of Xanax and a few strong drinks should knock you out for the duration, either of the movie or for the flight when you take it.

For those that enjoy the vicarious thrill of flying, or want to become heroes of the one-week wonder variety, you will love watching these movies to get some pointers on just what to do when you get your chance to fulfill that bucket list wish when catastrophe strikes.

If chicken without the fries doesn't daunt you, then feasting on the tasty thigh of your just dead best friend should pose no problems.  Faced with a bit of cannibalism or starvation, the choice is a no brainer.  A 1993 real life drama of the survivors of a plane crash in the South American Andes Mountains, where the lucky few still alive cope with icy mountainside living not of the five star skiing resort variety, a very restricted diet of what is at hand namely dead hopefully fat friends and the real possibility that being rescued is not high on the list of future events. "Alive" on IMDB

Liam Neeson stars in this 2011 movie, where again freezing to death is definitely on the cards, but the added drama of being eaten by a marauding pack of wolves constantly stalking you, is thrown in for good measure.  Shut your dogs outside for this one. The plane crashes into a remote part of Alaska where the wolves reign supreme and mere man is the next meal on the doggy menu of delights. "The Grey" on IMDB

This movie is practically a documentary on the event of 2005 when a Czech man flying to Spain was caught trying to smuggle endangered reptiles plus hundreds of poisonous snakes on a plane.  In real life the snakes were suitably transported in ultra secure containers, but the movie is basically a spoof on just what would happen if they had been of the sneaky snake variety that somehow managed to get out in a bid for freedom. If you are a snake guru, then a few cranky venomous serpents with freakishly large fangs sliding around the confines of an airplane will be no problem for you.  This is definitely not a movie for the faint hearted or those that suffer from ophiophobia, the unreasonable fear of snakes, which to me is just a healthy view of scaly reptiles. "Snakes on a Plane" on IMDB

If you intend to travel with your family, especially when you have a daughter in tow and hold down a powerful job, definitely don't watch this one.  This is a game of "hide and seek" with murderous threats when a daughter is kidnapped and hidden on the plane in a blackmail attempt. It is fraught with mega frustration as the flight crew and the other passengers do not believe that the mother ever had a daughter on the plane to start with.  There is no such thing as having faith in your fellow passengers preferring to believe that the fairer sex are neurotic trouble makers for your peaceful journey. "Flightplan" on IMDB 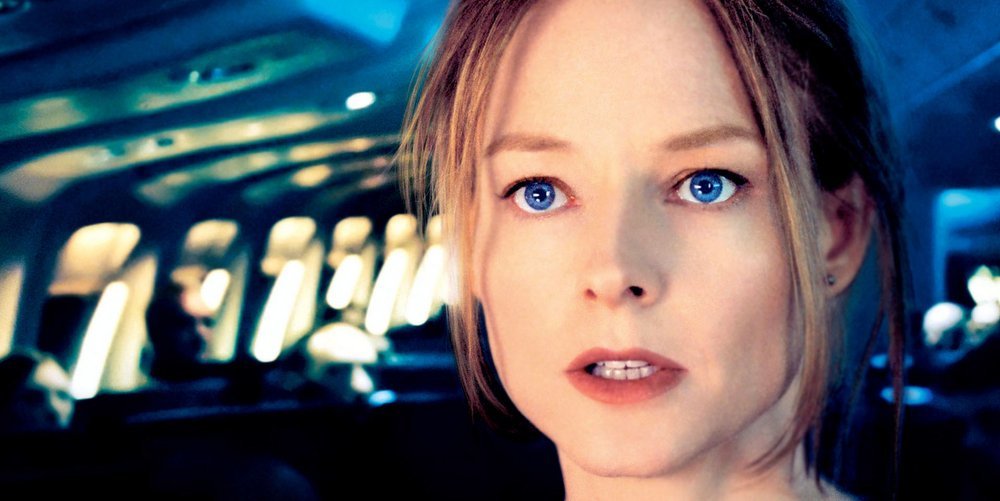 Kidnapped kids, freezing or being eaten to death do not seem to hit the same panic button as a terrorist hijacking threat on a plane.  We all shudder at this scenario.  But the baddie picked the wrong plane to hijack when the identity of Passenger 57 is revealed.  Action packed and fast paced, this 1992 movie is all about one man saving the plane, he gets awarded hero of the week status. "Passenger 57" on IMDB

Have you ever wondered what your pilot has been up to before taking control of that plane in which you are contentedly munching on your inflight snack?  This is hero turned villain material with a tearjerker of an ending. Definitely not one to watch before or during a flight, unless you get to see an alcohol and/or substance abuse report on the pilot before stepping on the plane. "Flight" on IMDB

There are several other movies that may increase the blood pressure on a plane such as the old one but a good one, "Airport" where a suicide bomber is planning to blow up a Boeing 707. Or, any of the sequels "Airport 1975", "Airport 1977" and "Airport 1979: The Concord" all playing on different dramatic air crash scenarios.

If you are looking for a bit of relaxation time out on a deserted island with your only company being volleyball, that you name "Wilson" for some ungodly reason, then the events on "Cast Away" won't bother you.  "Six Days, Seven Nights" is the soft approach to a plane crash for the romantics, where knowing how to build your own plane comes in handy.

Whilst a bit of adrenalin pumping action can be found on "Air Force One" with foreign terrorists as your co-passengers.  "United 93" is a bit too close to home, being made only 5 years after the 9/11 attacks with its copycat theme. Despite no plane crash, the very thought of being stranded in an international airport with no way out, "The Terminal" may just make you check that your passport is in order.

7 Tips To Keeping Your Luggage