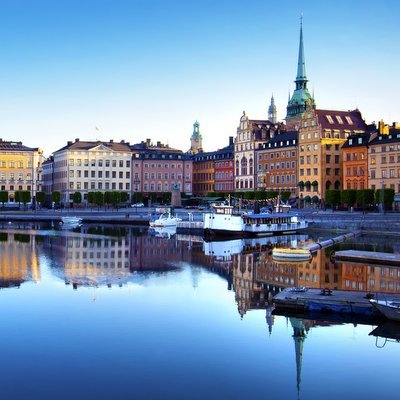 Being on the waterfront often means that you have a happening social scene, spontaneous performances, and vibrant markets. These five cities combine the waterfronts with cultural must-sees, excellent restaurants, and attractive sights.

Only around a third of the capital of Sweden is city, the rest is parkland and water spread across 14 islands in the Baltic Sea and Lake Mälaren. You can easily get to much of the waterfront, and almost each of the different neighborhoods is near the coastline.

If you want to explore the captivating medieval architecture and modest, café-lined squares, I recommend central island Gamla Stan. If you want to experience some of the best sights in all of Stockholm, I recommend the glass-covered gondola called Skyview. Södermalm meanwhile is known for its trendy nightlife, cafes, and shops.

Venice is not a massive city, but rather 118 small islands that are separated by water canals and connected via bridges. Falling in love with one of the world’s most romantic cities is easy, the only thing you need to do is walk across a single gorgeous bridge, go down the narrow streets, and you will instantly understand the charm of Venice. Its historic ambiance, sprawling palaces, and shimmering canals make this one of the most enchanting waterfront cities in the world – not just in Europe.

The glass-making island of Murano is one of the more popular tourist attractions you will find in Venice. Here you can find the celebrated 12th century Veneto-Byzantine Basilica dei Santi Maria e Donato, some impressive canals, and adorable-looking lighthouses.

This city on the Elbe River is special and unique in many ways. While Venice and Amsterdam are often praised and renowned for their impressive canals, Hamburg has more canals and bridges than both cities combined. In fact, there are more than 2,400 bridges throughout Hamburg. Hamburg was also named The Green Capital of Europe in 2011, which shows when you walk through the city.

HafenCity is the largest inner-city development project in Europe right now, and is expected to be completed by 2020. It is going to expand the central area of Hamburg with new features such as public parks, a university, schools, museums, restaurants, and apartments.

Nice is often referred to as the Jewel of the French Riviera and is located on the frontier between Cannes and Monaco. It is possible to divide Nice into three sections – the Cimiez neighborhood and old part of Nice are perfect if you want to get a feel for the culture and history of the city. You can find the Cimiez Monastery, the Musée Matisse, and Cemenelum (the capital of the Ancient Roman Empire) here. Traveling to the Promenade des Angalis is perfect if you prefer a more modern and laid-back approach. You can walk along the sidewalks in the shade of the palm streets as you follow the beach.

There is a reason that more and more travelers are in love with Lisbon. It is one of the most underrated capitals in all of Europe. It is the largest city in Portugal, and has an irresistible charm that we cannot ignore. One of the reasons that Lisbon warrants a visit is because of the mild year-round climate.

From Lisbon’s city center, it only takes about 15 minutes on the train to get to the beaches of Estoril and Carcavelos. The train ride itself is worth the trip as well, because you experience beautiful views over the coastline.

The history and heritage of Lisbon will always be connected to the ocean, which may explain why many of the sights and landmarks are near the sea. It is the second oldest capital in Europe, and one of the world’s greatest natural harbors. You will appreciate Lisbon if you are a history enthusiast. Some of the most spectacular monuments include Convento do Carmo (Carmo Convent), Castelo de São Jorge (St. George’s Castle), Torre de Belém (Belem Tower), and Mosteiro dos Jerónimos (Jeronimos Monastery).

A Shift To Limiting Tourism

Escaping the Tourists in Mallorca

Eight Reasons Why You Should Visit Scandinavia This Year