When you think of Peru, you instantly think of Machu Pichu and the Incan ruins. A mystifying, beautiful place, that captivates your mind and spins you back into the past. Your imagination runs wild with desire as you picture what life would have been like in the 15th and 16th century. This is a tale of my quest for the summit……

The launching pad for Machu Picchu is Aguas Calientes, a mystical village set in the valley between the mountains that surround Machu Picchu. Situated at the base of Machu Picchu, it is a beautiful place with everything you may desire before tackling the mountain. We hiked into Aguas Calientes from Santa Teresa along a combination of Incan trails, railroad and vehicle tracks.

Taking approximately six hours, the trek is an amazing experience that winds you around mountains, through jungle valleys, along a roaring whitewater river and upon the only way into the township, the railroad track.’

As you arrive in the town you are immediately surprised at how modern the city actually looks in comparison to most regions within Peru. The city is home to a multitude of hotels, restaurants, bars and market stalls, and it is the perfect place to unwind before hitting the Incan trail to the lofty heights of Machu Picchu.

We stayed the night at Rupawasi Condor House and spent the night relaxing in a rustic style tree house listening to the sound of the river torrents below us. Food in the township is cheap and extremely good value for money, make sure you check out the restaurants by the main square for a great view.

We awoke at 4am to an ice cold morning, eager to summit the mountain. As we shook of the morning dust and headed onto the trail up the mountain, it was still dark and extremely cloudy. The township and the surrounding mountains were so high above sea level that in fact the clouds were lofting through the township and amongst the mountains…..an amazing experience.

I had heard that the trail to the summit was in fact rather trying and would indeed be a physical challenge, I was not ill informed. Whilst not one of the steepest ascents I have taken, it was indeed made more difficult by the large stone staircases built by the Ancient Incan civilisation.

The trek to Machu Picchu took approximately two hours. As we reached the main gates of the ancient civilisation we were all dripping with sweat despite the icy cold temperature. The air was thick with cloud and crawling out between the clouds were the lush jungle peaks of the Andes, reaching for the sky. The view was utterly spectacular with a combination of lush jungle green, snow capped peaks, thick icy clouds and the raging river below. 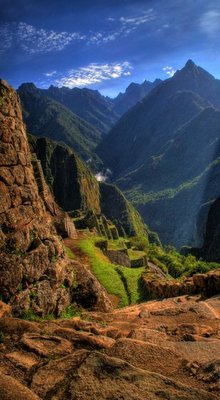 An epic trek, that has emblazoned itself amongst the minds of all who have had the privilege of making the journey. As the clouds slowly started to dissipate the glory of the Incan ruins unfolded before our very eyes…..

As you walk through the gates into Machu Picchu a wave of prehistoric nostalgia overcomes your senses. It truly does feel as if you are blasted back five hundred years and thrown amongst the idillic reality of the Ancient Incans. Massive horticultural steps climb their way up the mountain peaks as clouds float amongst the ruins. Semi ruined temples litter the skyline and haphazard paving leads you around the epic city. Lush jungle green floats amongst the large stone buildings and llamas roam the grounds of the landmark.

As you wander amongst the wonderful Incan buildings and sacrificial alters, you are chanted a story of conquest, glory and demise by the local guides.

The guides tell a tale of a civilisation that reigned for nearly a century in a large territory encompassing Chile, Peru, Bolivia and Argentina. They tell of the ancient Incan runners that would run the Incan trails built between the cities of the civilisation, coca leave fuelling their energetic strides. They tell the tales of animal sacrifice, human sacrifice, sundials, astronomy and the Incan University situated in Machu Picchu. An intriguing and mind boggling civilisation with a unique culture, the Incan tale is told to a silent crowd. It seems as though every word echoes within in your mind, as your senses are overwhelmed by the sheer beauty that floods your sight and the epic tales that fill your mind. An enchanting experience every human being should partake in, at least once in their life.

As you wander through Machu Picchu, you cannot help but gaze upon the large peak that sits alongside this very mountain. Wayna Picchu climbs approximately a further 800 meters above Machu Picchu and is home to the ancient Incan Observatory. 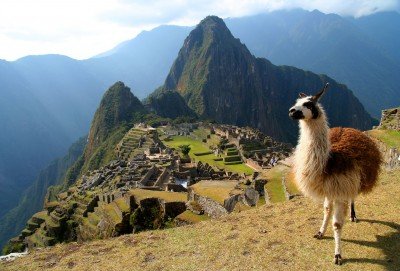 For a mere ten USD you can gain entrance to this trail and summit the mountain, gaining an unsurpassed view of the ancient Incan ruins and the surrounding territory. Taking approximately one hour, the climb was just as arduous as summiting the mountain earlier in the day. As we crested the summit, the view eclipsed anything I had ever seen in my life.

As we stood alongside the Incan observatory gazing down at the city below, the clouds were slowly parting. The sun rained upon the ruins and Machu Picchu below filled out a panoramic view. Purely the best vantage point to photograph the city below and by far the most spectacular vision in my mind, is this very view. You wander into the age old observatory and are instantly amazed at how advanced for their time the Incans truly were. Their ability to navigate by the stars, to track time by the stars and to invent a calendar that worked perfectly into the lunar cycle.

An overall spectacular, mystifying and liberating experience, Machu Picchu anchors ancient civilisation into the minds of all who travel there. An absolute “must see” for the region and by far a primary destination for many travellers, the historic Incan Mecca inspires imagination, history, culture and diversity into even the most somber of travellers.

The World's Most Exciting Galleries & Museums to Visit in 2019