On Shikoku, the smallest and least populated of the main Japanese islands, it’s easy to fall in love with the mountains; the 88 pilgrimage temples; the famed, steamy bowls of udon; the hand-woven vine bridges; and the surprisingly soulful people.

In the latter category, I was visiting Ritsurin Garden in Takamatsu with a volunteer guide named Masanobu Matsuo, or Nobu for short. He explained that almost 400 years ago, a feudal lord built a secondary residence there, and for 22 years the garden was exclusively for royalty. It took 100 years to create the current garden, which is the second largest in Japan. It comprises lakes, streams, bridges, hills, and 32,000 trees, 1400 hundred of which are pine.

Then, suddenly, Nobu stopped talking to my head and spoke to my heart. “This is a magical garden,” he whispered, “and everything is more than it seems. Look at the different types of bamboo fencing. One form conveys the clear message that you should not enter. Another style means that you decide if you want to enter or not.”

We walked for a few minutes, and then Nobu pointed to a lion- shaped stone next to some peonies. “The lion is the king of animals,” he said. “It has no enemy except an insect that eats its insides. But the dew on peony petals kills the insects. So the lion sleeps peacefully under the peony tree. That is where it feels safe. You have to find your own peonies in life.”

We took a few more steps, and Nobu inquired if I would like to learn how to appreciate a tree. “First, you notice, in details, the beauty of the bark. Then you admire the branches and how they interact with each other and the paths they take. Then, and only then, you are ready to appreciate the beauty of the tree as a whole.” In two hours, he changed, forever, the way I look at trees.

The second surprise on Shikoku was the village of Nagoro, in the remote Iya valley, which is peopled by life size, fully clothed scarecrows. On a snowy day, I walked through the village, passing by figures of farmers tending their fields, kids playing, and a mailman making a delivery. A few conversed in front of abandoned shops, while others drank beer, angled for fish, or waited for a bus in a shelter. Each one had a distinct personality, size, shape, and age. The farther I walked along the main road, the more straw people I encountered. 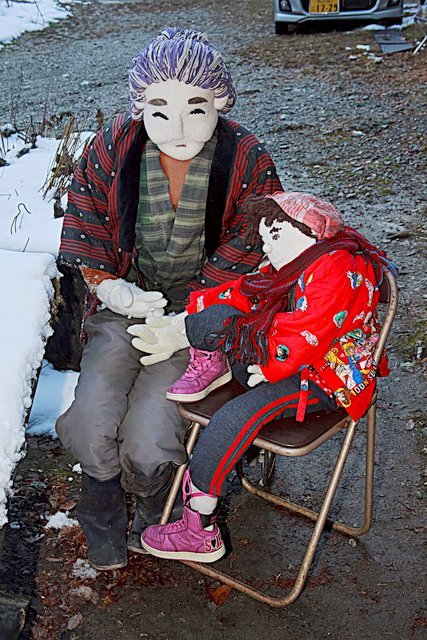 The scarecrow artist, Tsukimi Ayano, was at home the day I arrived. “I was raised here, and then moved to Osaka,” she said.  “I came back to take care of my father and I made my first scarecrow of him, working in the fields. Then it became a hobby, but the dolls weren’t very effective as scarecrows. Since that time I have made 450 figures, but I replace them every few years, so there are only 230 now. They are like my family, or my children. Every morning before breakfast, I make my rounds to see the dolls and say hello.”

Ayano stuffs the bodies of the scarecrows with newspapers, and the heads are filled with cotton batting. She uses flesh coloured material for the faces and hands, and recycles all the materials except for newspapers when she retires her scarecrows and creates new ones. Most of the figures spring from her imagination, but some are inspired by neighbours she remembers, or family members, or people she meets. There’s even a celebrity Japanese news anchor.

Visitors sometimes leave clothing behind, or send Ayano clothes to dress the scarecrows. “I never thought my scarecrows would turn into a tourist attraction,” she said with a grin.

What You Should Know About Travelling Abroad with Medication

Eating Buffalo in Vientiane - The City of Sandalwood