The Echo of Singing Bowls— Virtual Travel to Nepal

Revel in a virtual trip into the high mountains where mythical yetis lurk, and marijuana grows in wild abandonment on the side of dusty roads. The country's flag is two triangles representing Hinduism and Buddhism plus the Himalayan Mountains – this is Nepal. 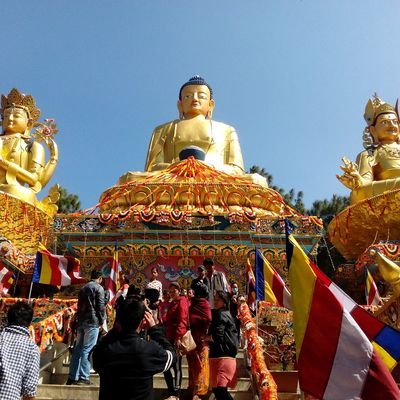 Cows are sacred, and once they stop giving milk are left to roam the streets for the community to look after. Even their dung is considered holy – imagine blessing your home by cleaning the floors with cow excrement and water.

There are so many different languages that even some Nepalese can't chat with each other. Rustic hill villages bustle with life, jungle wildlife runs riot, and golden temples shine in brilliant late afternoon sunsets. The iconic white-capped mountains of the Himalayas lure trekkers from around the world and its bohemian hippy vibe creates a pseudo-Disneyland for globetrotters.

Nepal should be on your post-Corona bucket-list. In the meantime, you can have a virtual travel experience without getting on a rusty smoke-belching local bus dripping with people hanging from the roof, out of windows, or straddling bumper bars.

Dressing up to get in the free-spirited Nepalese mood is purely a matter of connecting with your avant-garde persona. For the guys: throw on some long loose pants with a big shirt of some description instead of a traditional "daura" shirt – closed-neck, five pleats, and eight strings to tie around your body tunic-style. Plop on a dhaki topi hat, or failing this, a teapot-cozy to make you feel noble and honorable.  Females can just grab a vibrant sari, or failing that, wrap a large sarong around your svelt-like COVID-body and tie it like a sari. Throw on plenty of gold bling plus a scarf, and you are ready to party.

Turn up the volume on some Nepalese music. Tibet and India have greatly influenced the music scene of Nepal. Plug into the haunting sounds of singing bowls, the tones issuing from the traditional string instrument, the sarangi, and the single hollow pole of bamboo known as a "Bansuri" or flute, whispering in the air.  The dominant and rhythmic bellow of drums mixed with gong-like instruments and cymbals will ring out.

Get busy with a jigsaw puzzle to flex those brain waves that may have been put in hibernation or lulled into a movie-watching fog. Google Nepalese puzzles or head straight to Zazzle. They have some amazing jigsaws depicting the Himalayas, such as the Makalu Advance Base Camp Puja jigsaw.

The national drink is Raksi – it's often homemade and tastes a bit like Japanese sake. If you don't have the skills or know-how to make your own from millet or rice, then make yourself a cup of tea. Traditional "Nepali" tea is mad 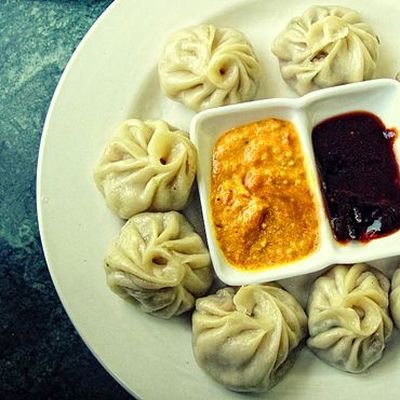 e with tea dust, milk, water, heaps of sugar and ginger, cardamom or pepper, plus salt and yak milk. You can forget the yak milk if you don't have one of these massive beasts of burden grazing in your backyard. If in doubt as to what drink will go with your Nepalese feast, grab a beer.

Nepali food – If you love dumplings, head to the SBS chicken momo lesson on how to make this staple fare and must-gorge-on tasty treat. Momo is the Nepalese name for dumplings that can be stuffed with veggies, chicken, or if you can get your hands on some buffalo meat, do indulge.

Dish them up either fried or steamed with heaps of red chili chutney, if you like a fiery mouthful. Indian pakoras and samosas have infiltrated the country's cuisine from India as another snack food. The most popular meal in Nepal is daal bhaat tarkaari.  Translated into food, it equates to lentils, rice, and vegetables.

Explorers' eye candy of the sights of Nepal, from iconic prayer flags fluttering in the wind on mountain tops to ancient UNESCO World Heritage-listed squares of Kathmandu, temples, pagodas, markets and traditional crafts displayed in a rainbow of colorful abandonment can be found on the Internet:

Wanderlusting strategists should poke their noses into one of the many travel guidebooks available. Think Lonely Planet and Insight Guides to map out their post-COVID travel itinerary. Maybe go a bit lock-down crazy and slather some blackboard paint on one of your walls. Create a chalked route with notes as an inspirational board of dreams.

List-makers who like adrenaline-pumping action can practice mountaineering and trekking skills in a national park of their home country. You probably won't have snow and plodding yaks, but let your imagination go with the flow. Go bungee jumping over 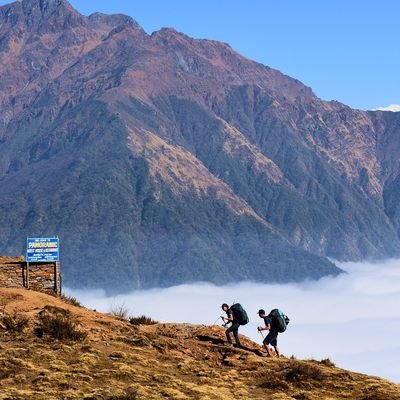 a gorge, or take to the sky paragliding as if you are soaring over the colorful town and epic views of Pokhara's stunning lakes. Find a gushing river and canyon downstream or go white water rafting to get a real adrenalin rush. From skydiving to motor biking across Nepal, adapt these scenarios to fit in with where you live.

List-makers of the "I don't hike" ilk can catalog everything on their wish list in alphabetical order. Shopaholics can anticipate meandering Thamel's alleyways.  Highlight joining a food tour to know which local restaurants are safe to frequent, rather than being held hostage by a dose of "Kathmandu quickstep" (aka diarrhea).  Check out what joy flights over Mount Everest are available, what temples you want to see, and which Ayurvedic healers offer the best massages.

Bookworms will become riveted to tales of this ancient country that's home to eight of the 10 tallest mountains in the world. "While the Gods Were Sleeping" by Elizabeth Enslin is a cross-cultural memoir from a female's perspective set in rural Nepal. "The Snow Leopard" by Peter Mathiessen regales with a classic story of one man's journey in the Upper Dolpo area of Western Nepal in a quest to overcome his grief of losing his wife. "Into Thin Air" by Jon Krakauer is the best book about the tragic 1996 Everest climbing expedition during which eight members died – it inspired the 2015 movie "Everest."

Movie buffs can microwave some popcorn, if not in the mood to make some momos, and relax in front of the movie "Himalaya." It was the first Nepali film to gain recognition at the Academy Awards. "Sherpa" is based on the life of a local Sherpa who has summitted Everest 21 times. "Kathmandu, A Mirror in the Sky" tells the story of a young teacher and social worker based in the Kathmandu slums. And, "Seto Surya" (White Sun) is a beautiful film set deep in the Gorkha District mountains.

Imagine putting your head on a pillow at one of the accommodation options below:

Curl up in bed and dream of luxury jungle safaris, private treks in the Himalayas, and medieval cities of the old trade routes linking India and Tibet.

What Not To Pack