After being in Asia for some time, another temple to gawk at looses some of its allure.  In fact, you can get to the stage where it's a "ho hum" scenario, partially based on the fact that you may be a religious non-believer or just not aware of the beliefs of Hinduism or Buddhism, the 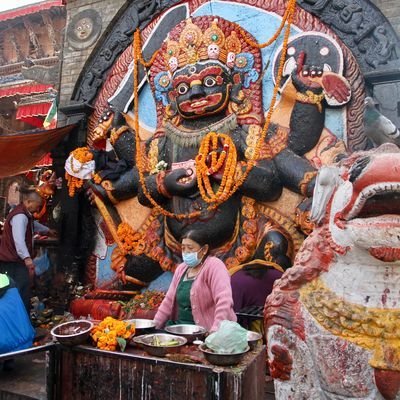 That word "sacrifice" stuck in my head upon seeing the temple dedicated to the goddess Kali and being told by my “untrustworthy” guide that the temple was in fact where children were sacrificed. Visions of the movie "Indiana Jones and the Temple of Doom", with its Thuggee cult and black magic immediately came to mind.

My guide said that the huge pile of straw sitting at the elaborate and super frightening gate would be used to sacrifice a cow by the Ghurkhas, who lived in accommodation nearby, at midnight.  This day was the end of the celebratory period of the Festival of Lights (Diwali), and I was in Bhaktapur Durbar Square with an unscrupulous guide who reeked of alcohol. Not every tourist gets to pick the right guide!

My guide had a penchant for not telling me the correct names of the temples (though whether I would have remembered them or not is another matter) but was more intent on regaling with scary tales of death (think the "Temple of Justice", where apparently justice was handed out liberally with the aid of a sword). Sex became a highlight when we came to the temple he called the Kama Sutra Temple, with carvings of every contortion the body could get into during the act.

The impact of the 2015 earthquake severely damaged many of the temples in the square where kings were crowned that is the traditional pulsating heart of the old town of Kathmandu. The entire square was given the state of a UNESCO World Heritage Site in 1979, as many of its buildings and temples date back to the 17th and 18th Centuries or older.

Reconstruction will take years, but it's still worth taking the time out and spending the money on the entrance fee and a guide (just not the one that I had) to marvel at the rich cultural significance of the buildings, such as The Palace of Fifty-five Windows, the Vatsala Temple with t 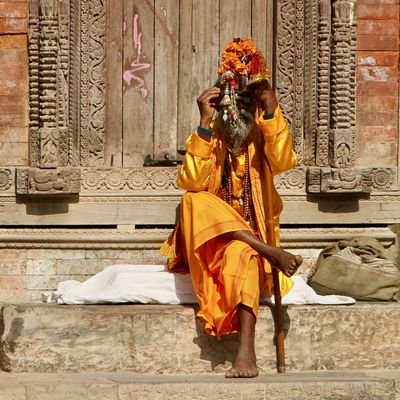 he "bell of barking dogs" and the Nyatapola Temple that is the highest pagoda of profound beauty ever built in Nepal.

Remember to keep your visitor's ticket when you leave, as it can be used for the duration of your Nepalese visa. Unfortunately, my pseudo guide ran off with mine, probably to resell it to some other unsuspecting tourist.

There are so many temples and stupas in and around the city of Kathmandu that you can spend a whole day jumping from one glorious sight to another, if you wish. Or if you wish to make a dedicated trip to just one, head to Nepal's most iconic temple on the banks of the holy Bagmati River, "Pashupatinath", that is the final destination for many and a hive of humanity for others. The paths leading to the temple are awash in stalls selling rudraksha beads, conch shells, incense, bright yellow marigolds, rainbow displays of "tika" powder, plus an assortment of pilgrim items.

A mammoth conglomeration of buildings straddling the dirty brown waters of the river sitting at the end of the runway of the Tribhuvan Airport, the temple of Pashupantinath is the pulsing heart of Hinduism that is connected to Shiva in the form of "Pashupati"—the lord of the animals—regarded as a national deity. A UNESCO World Heritage Site since 1979, this is no ordinary temple, but an enclave of 518 temples, ghats (cremation spots) and ashrams perched on the riverbanks that has evolved since the fifth century.

This is where families bring the bodies of the dead to be cremated in a ceremony named "Antyesti" (last sacrifice). It appears to be very much a spectator event, as tourists with cameras mingle with locals opposite the Hindu "only" golden-roofed Pashupati Mandir temple. You can watch the whole cremation service from beginning to end ad nauseam, as it's a very busy place where colorful lives end in colorful send-offs. The cremation ritual will have you spellbound, and depending on which way the wind is blowing, covered in ash.

Juxtaposed with the solemn goings on as funeral pyres are swept clean of debris into the river, the temple grounds are alive to the sound of daily activity, such as hawkers shooing thieving monkeys away and hustling hordes of tourists, creating an inexplicable bond of life, death and grief in an everyday sense.

Teaching Your Kids About Sustainability During Your Travels