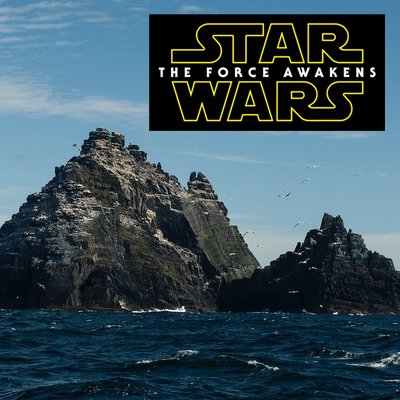 There is no denying that the latest Star Wars movie is the biggest movie in recent years, and has the biggest opening for any movie we have ever seen. While special effects certainly play a large role in the Star Wars movies, another reason that these movies have become so popular is because of their spectacular cinematography. This is helped because of the amazing natural beauty of some of the Star Wars filming locations. I decided to do some research and wanted to show you some of the amazing locations where this blockbuster was filmed.

Even though this is a place that is often quite relaxed and associated with watersports, the Lake District is associated with heavy fighting and an intense battle in The Force Awakens. The most notable here is Derwentwater Lake in Cumbria. While all of it is a naturally beautiful area, one of the highlights here is Derwent Island. The house on this island is only open to the public five times every year, and you can only get there if you are willing to paddle using a canoe.

If you wanted to book a trip here and see the sights for yourself, one of the best places to stay is Lodore Falls. This hotel overlooks Derwentwater and it has award-winning gardens and more than 40 acres of total grounds. It is not only close to the lake, but also near the Lodore Falls (its namesake).

One of the main selling points of the Star Wars movies has always been that the settings are so varied. One moment you find yourself in a frozen tundra, the next you are in lush green territory. The green in this movie is represented by Puzzlewood in the Forest of Dean. These historic woodlands have already been captured on film before, in both the Dr. Who and Merlin series. If you are interested in immersing yourself in naturally beautiful trails, this is one of the better places to go.

If you want to stay directly alongside the woodlands, I can recommend the Tudor Farmhouse Hotel.

This hotel dates back all the way to the 13th century and offers a gorgeous, relaxing place to stay. It is also located within close proximity to Clearwell Castle

Located just a few short hours outside of the city of Abu Dhabi, the sand dunes here make it a very popular destination for those who want to partake in motor sports. There are also other activities nearby, including campfire barbeques, falconry shows, and camel riding.

If you want an authentic desert experience, Qasr Al Sarab by Anantara offers a breathtaking panorama and a stylish desert decor. The accommodations have earthy hues, luxury fibers, and all of the rooms offer spectacular desert views. Each room also has a pillow menu, rain shower, and soaking bath.

The snow-capped mountains in Star Wars were shot in Iceland, and some of the most stunning areas include Krafla volcano and Mývatn. Both areas are only separated from one another by 14 miles (located in northern Iceland) so if you do travel here, it should be easy to see both areas. The natural baths are the main attraction here, the water is heated through geothermal heat.

Located in the heart of the beautiful Lake Myvatn region, Hotel Reynihlid offers a great place to stay as well as a place to enjoy some of the better regional specialties. Some of the dishes that you should try include Icelandic lamb or Arctic char fish.

Considering that it is an UNESCO World Heritage Site, you already know that Skellig Michael is going to be a naturally beautiful area to look at. The rugged natural beauty found here makes for the perfect otherworldly look that Star Wars has become famous for. The island is home to a number of protected wildlife, and one of the most famous places found here is the monastery site, which has actually been on the island since the 7th century.

Getting to the island can be rather challenging, but one of the best ways that you are able to plan a visit is by staying on nearby Valentia Island, especially because there is no accommodation on Skellig Michael itself. However, Shealane Country House is within close distance to the departure point for Skellig Michael

This Month In Travel - Winter Holidays