The Ghosts of Olhão, Portugal

It was during a calorie-loaded late-night binge of chocolate and caramel torte, whilst delicately sipping an aged Portuguese port that I first heard about a little boy that lured fishermen into doing a vanishing act. The quaint cafe in a dimly lit alley was the perfect setting to hear the whispered stories of the local ghosts from an elderly resident waiter with a cheeky grin.

Engulfed in myths and ancient stories of superheroes and naughty, spooky children, the fisherman's village of Olhão has numerous ghostly apparitions hanging around its ancient cobblestoned alleys. Depicted in modern sculptures the village shares its history of tales via the "Caminho das Lendas" (Legends Way).

Begin at the back of the warehouses smothered in murals by the harbour and follow the meandering alleyways to check out statues such as "Arraúl"—the man who survived the destruction of Atlantis and the creator of the islands of Ria Formosa. You can also immerse yourself in the Gothic-type delusions of local inhabitants disappearing after they have gazed upon mysterious characters, such as the "Big-eyed Boy", the "Enchanted Moorish Boy" and the seductive "Floripes", who likes to visit drunken fishermen.

The resident stork of the old town of Olhão strikes 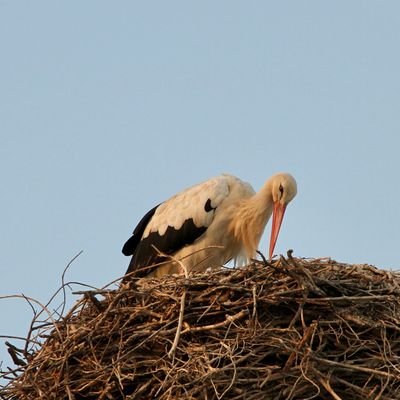 elegant poses; first one leg with her head this way and then balancing on the other leg whilst the wind ruffles her feathers. She is the preening iconic symbol of the Algarve coastline of Portugal. Her humongous rustic nest of twigs adorns the top of the small chapel behind the church "Nossa Senhora do Rosário",and it's also occasionally home to her wayward partner that flies the coop and heads to Morocco for months at a time.

As much as she is symbolic of the Portuguese coastline, the church has been the symbol of hope for generations for the local fishermen's wives who pray for the lives of their husbands during stormy weather. Built in the 17th Century, it's where every Saturday weddings and funerals happen en masse, whilst the small chapel is open until midnight every day for those who may wish to chat to their long departed loved ones.

The old waterfront town of Olhão is a maze of cobblestoned alleys with whitewashed houses topped with flat Moorish rooftops squished together like sentinels. Flash white boats wallow beside humble fishing vessels in the marina, and the seafood market is flush with fishy goodness every day of the week.

Tourists show off lily-white legs ending in socks and sandals (much to the dismay of the fashion critics) or have obviously baked in the sun for way too long and strut their stuff in typical casual holiday gear with flip-flops on many crusty feet. Rooftops overflow with languishing bodies holding wine glasses at sunset, and cinnamon sticks are used to stir your espresso.

The Saturday markets on the waterfront go off to the tune of loud music and a crowd that hustles into the village to get their weekly supply of goodies or to merely gawk at the fresh local produce on offer. From live ducks to succulent marinated olives, the reddest swollen tomatoes to locally made aloe vera body lotion, it's all on display in an assortment of ramshackle stalls.

This is seafood heaven, with restaurants lining the main drag on the foreshore dishing up fish that is still flapping from the morning's catch, an endless array of prawn dishes and whatever other edible sea creatures you can imagine, plus items that definitely belong in the realms of indescribable. The foreshore is decorated with colourful clothing stalls of the beach variety, where everything seems to be the same price, unless you are into having a haggling match in stuttering Portuguese lingo.

Only a short hop from the city of Faro, Olhão is the biggest fishing port along the Algarve and the gateway to the Parque Natural da Ria Formosa's sandy stretches of Armona and Culatra via a short ferry ride. During the 17th Century, it was a quaint fishing village, and in 1882 home to the first canning factory pushing out canned tuna and sardines.

The best time to land in town is the second week in August, when the "Festival do Marisco" is in full swing; think music and food to blow your senses out of the water.  From tripping over sunbathing dogs to watching the antics of skinny stray and curious cats lurking in alleys, Olhão is where you can simply sit back and let the world pass you by in a salty sea haze.