Why Whale Watching Should Be on Your Travel Bucket List

When I made a travel bucket list for myself in my mid-twenties, whale watching was at the top of the list. I’ve often pondered how it might feel to witness these gentle giants sailing through the ocean, haunted by regret of missing out on a whale watching experience at Abel Tasman National Park many years earlier.

After years of planning fantasy trips to places such as Vancouver and Baja, obsessing over the kinds of whales that I would like to encounter and failing to take the plunge due to the costs involved, I finally caught glimpse of my first majestic marine mammals during last year’s Iceland adventure. After one three-hour whale watching trip, I was hooked. I couldn’t imagine any experience ever topping what I’d just experienced.

Now when planning my travels, there’s just one thing on my mind: where can I go whale watching next?

Some travel experiences change you in a way that you may not expect. Watching whales swim, breach and flap their fins in the ocean off the coast of Husavik affected me much more profoundly than I had anticipated, even after years of yearning to witness my favourite animals in the flesh.

After waiting with bated breath as we sailed towards the snow-capped mountains on the opposite side of the bay, we were finally rewarded by the sight of a large bluey-grey mound rising briefly from the water in front of us before quickly submerging. A humpback! Time ground to a halt as I became transfixed on the spot where the whale descended, barely daring to breathe until it rose again.

As I snapped away on my camera, pausing to stop and enjoy the sight with my own eyes, there was one thing that I couldn’t stop thinking: we are so small. The gigantic size of a sixty foot whale swimming beside our boat made all of my futile worries and problems pale into insignificance. These majestic creatures dwarf us spectacularly. It’s a similar feeling to when you stare into the night sky. You feel tiny.

Three hours at sea beneath a pale pink sky flew by and we were too soon whisked back to dry land, away from the humpbacks, minkes and porpoises that had been enthralling us. As we picked up speed and headed back to the harbour, I found tears streaming down my cheeks. I was devastated that the tour was over, overcome by what I had just seen, disappointed that the blue whales had been too far out to visit, ecstatic that I had finally seen my beloved whales. 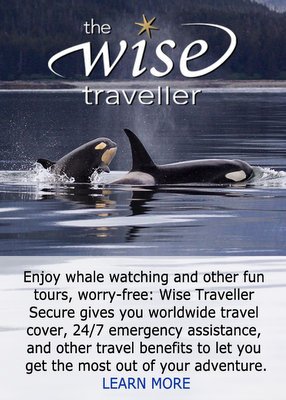 It was an emotional comedown; all of that excitement and pleasure abruptly coming to an end. Once we’d disembarked the boat, however, the adrenaline seemed to peak again, as we discussed what we had seen. Too excited to sleep, we visited a geothermal lake and one of the country’s largest waterfalls in the dead of night, beneath the midnight sun; all the time talking about the whales.

It’s difficult to put into words how enthralling it is to witness these magnificent creatures for yourself. Of course, most of the world’s best whale watching destinations were (not too long ago) whaling hubs, where locals harpooned and plundered these gentle giants instead of peacefully and proudly showing them off to tourists. It’s hard to visit these places without remembering this, and thinking of all of the whales that the oceans lost as a result. Like when witnessing any endangered animal, it’s a bittersweet encounter.

Whale watching trips are now strictly regulated, abiding by rules that protect the whales. Touching the whales or swimming with them is strictly discouraged, aside from certain locations around the world (such as Baja) where the whales seem to enjoy the close encounters. But it is enough, simply to watch them dive and breach and to hold your breath whilst hoping to hear them sing.

Solo Destinations for the Adventurous

The Crisis of Human Trafficking