90 days of disruption and business volatility on a global scale!

When President Donald Trump signed the executive order to ban people from Iraq, Iran, Libya, Somalia, Sudan, Yemen, and Syria from traveling to the United States, he provoked further protests that had begun with his inauguration both in the US and Internationally.

This travel ban will not have a direct impact on US tourism because the number of tourist visitors from each of the countries is minuscule.

The US doesn’t have a majority-Muslim country among 20 of the largest inbound travel markets, although India is counted as 11th largest visitor group and the country does have a fair-sized Muslim minority population. 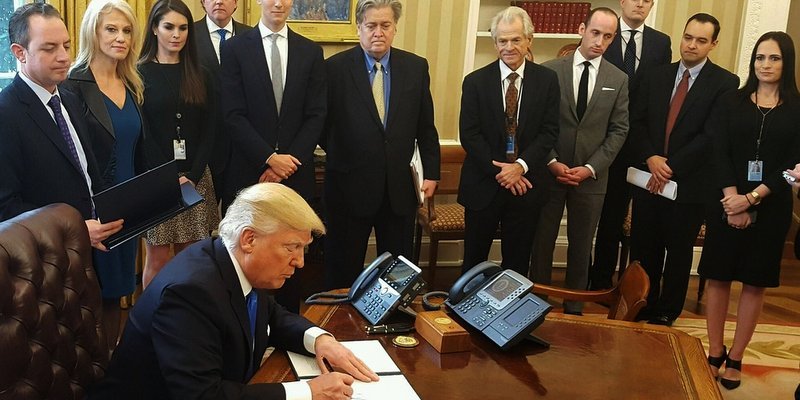 The disruptions have meant that Emirates airline had to re-organise their flight rosters for the US routes because the ban applies to pilots and crew. Emirates is the world’s largest long-haul airline, flying to 11 cities in the US.

The travel ban, whether temporary or not, has been condemned by business leaders and CEOs. Brian Chesky, co-founder of Airbnb stated that his company would provide free housing to anyone left stranded by the executive order.

JP Morgan has around 140,000 US employees affected by the travel restrictions, and this ban affects their business in over 100 countries. Yet, they appeared to be sitting on the fence when they issued a statement saying they are grateful that the country is being kept safe through hard work and sacrifice.

Netflix boss Reed Hastings believes that this “un-American” action will bring further hatred and loss of allies, making the ountry less safe rather than improving security and safety for US Citizens.

Goldman Sachs CEO, Lloyd Blankfein said that his firm did not support this policy as it would impose personal hardship on staff and families of the company. The “initial” total ban on all people from the affected countries was lifted to allow foreign-born US residents to return to the US. However, there is still a complete ban on refugees from those countries.

This has sparked outrage, prompting Starbucks CEO to throw down the gauntlet at the Trump government executives, stating that the company would hire 10,000 refugees over the coming five years in an attempt to alleviate the suffering of people who have had to leave war-torn countries, such as Syria, Somalia, and Iraq.

Employees from Google have taken up the baton, along with their company executives, and walked away from their desks to protest against Trump’s order to bar entry of nationals from the seven affected countries to the US. Company co-founder, Sergey Brin was at San Francisco International Airport with a group of company protestors while the company recalled 100 staff members from the affected countries.

So far the travel restrictions have led to federal court action by Amazon against the legality of the documentation and raised the awareness of the plight of refugees, to the point that some are stranded and have been given temporary refuge in Canada.

The American Civil Liberties Union and Immigration Legal Resource Center recently received $2m from the employees of Google, which was matched by a company donation. The orders regarding immigration and trade with the US were felt strongly around the world, not least in the equities market. Earlier in the year the Dow Jones experienced rally in equities taking it above 20,000. The immigration and trade ban put a short and immediate end to any further growth. Three consecutive trading days have seen a sharp selloff in equities, shoving the DJ below 20,000.

Bloomberg News reports that President Trump’s policies have actually “brought gold back to life.” The price of gold has rallied sharply over the last three days, gaining $30 an ounce. On January 27, gold was at a low of $1180, and by February 1, it has bounced back above $1211. The price increase was attributed to two things: safe haven buying and weakness of the US dollar.

The FTSE 100 took a battering, and the British Pound bumped and skidded in early trading.

On a final sobering note, there is much fear and trepidation for US citizens who are working abroad. For example, an Iraqi USAID translator said that he believed that the order was adding fuel to the already smoldering anti-US fire in Iraq.

The US has troops in Iraq who are fighting ISIS, and the belief is that this travel and trade restriction will give Iran an opportunity to garner more hatred towards the US and the American troops. It is feared that the US could pull out of Iraq after completing the Mosul operation, leaving the country vulnerable to Iran and the IS terrorists again.

What all this means for consumers and travelers to the USA, whether for business or pleasure, is that perhaps this is no time to travel. If you are in any way related to one of the seven countries mentioned in the trade and travel ban, it’s probably best to give the America a wide berth and postpone your visit, at least for the next 90 days!

Best Places To Spot Blooming Blossoms In The USA This Spring