Ten Tips for Chasing the Northern Lights This Winter

Watching the Northern Lights tops many bucket lists – but it’s trickier than you might think to spot them. Last year, I ventured to Finnish Lapland, sure that I was going to finally spot the elusive Aurora, but was thwarted by cloudy skies as well as being just below the Arctic Circle. This winter, I’m determined to head back to the Nordic countries in the hope of viewing the Aurora Borealis. I’ve been doing my research and thought I’d share my top tips for Northern Light chasing.

Head to the Arctic Circle

Unless there is particularly high solar activity, your best chances of spotting the Northern Lights are to head north of the Arctic Circle. This includes the far north of Canada, Greenland, Iceland, Norway, Sweden, Finland and Russia. Many people forget how large these countries are, heading to places such as Oslo and Stockholm in the misguided hopes that they’ll spot the Northern Lights. However, you need to head as far north as possible for your best chances.

The Northern Lights actually occur all year round, but because most places in the Arctic Circle have 24 hours of sunlight during summer, you have no chance of seeing them then. The best time of year is generally from September to March, with September, October, February and March being the best months due to slightly better weather conditions.

Get away from artificial light

You won’t be able to see the Northern Lights in a city because of all the light pollution, so get out into the wilderness. Either join an Aurora-chasing tour, book accommodation away from the city or hire a car so you can drive away from the lights of the city. Once you’re in a dark place, you’ll be able to spot the lights even if they’re quite weak.

Be prepared for bad weather

If it is snowing, raining or cloudy, you won’t be able to see the Northern Lights. You need a clear sky to see the lights, and it’s often very cloudy during the winter months. When I was in Finland last year, it was cloudy every night, completely thwarting our chances of spotting the Aurora.

Go on a tour

Northern Lights tours will use satellite imagery and weather maps to find the gaps in the clouds and head for clear skies. Make sure you book onto a tour with a small group of people (large buses won’t be able to drive on the smaller roads) that is prepared to drive long distances into the wilderness in search of the lights. Choose a tour that offers to change the date if the weather conditions are bad.

Take the KP index with a pinch of salt

If you’re below the Arctic Circle, the KP index is a useful way of telling if the Northern Lights are strong enough to spot at your altitude. Typically, you need a KP of 5 or 6 to see the Aurora in southern Norway or Sweden, for example. If you’re above the Arctic Circle, you should be able to see the Northern Lights at any KP, if the conditions are right.

Don’t set your expectations too high

Most of the time, the Northern Lights look like a pale green cloud, and you won’t see them as they look in photos, unless you take a photograph with a long exposure. If you’re lucky, you might be treated to a spectacle when they are bright green and dancing across the sky, but this is quite rare.

Spend as much time as possible in the north

Don’t expect to spend one or two days within the Arctic Circle and see the Northern Lights. You need to plan to spend as much time as possible there for your best chances of spotting them. I was only in Lapland for three nights last winter, and apparently the Aurora was visible the night that I left!

Stay in accommodation with Aurora alerts 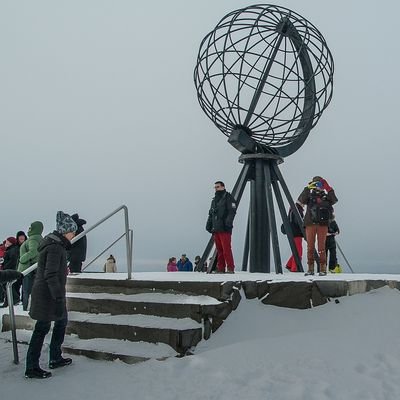 Some hotels and guesthouses will ring your room or knock on your door in the middle of the night to wake you when the Aurora makes an appearance. Considering that you could stay up all night hoping to spot the lights, this is a much better idea that will allow you to rest without worrying about missing the spectacle.

It will be very, very cold, and you’ll be spending a lot of time outdoors. Bring warm clothing such as a ski jacket, ski boots, woolly hat and merino wool layers to ensure you keep warm and comfortable when searching the skies. It would also be nice to pack a thermos flask so you can enjoy a warming cup of tea while outside.

AmEx & AirBnB: A Match Made in Bus Travel Heaven?