Fairytale Sintra in Portugal lures the tourists from Lisbon, whether it be for a day or longer, with its alluring picturesque pastel-hued palace balancing on a dominating hilltop and local rumours that Madonna attempted to buy one of the historical homes in the city.

This ancient enclave snuggled into the forested foothills of the Sintra Mountains is wrapped up in traditional astral cults. This is where the Celts worshipped their moon god, the Moors built a castle and the 18th-Century Portuguese royals meandered nonchalantly in their finery whilst w 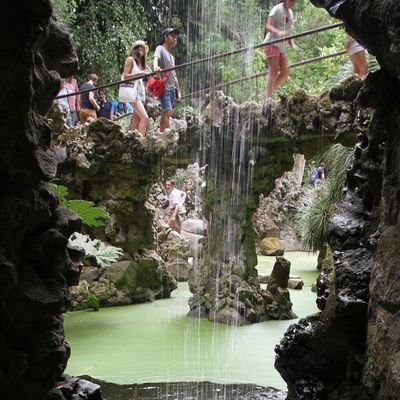 allowing in its cool climate. Lord Byron sang the charms of the city in his epic poem "Childe Harold's Pilgrimage".

The Sintra Mountains that are a granite massif 10 km long are known as "Monte da Lua" (Mountain of the Moon). This mammoth mountain chain thrusts up abruptly from a vast plain in the north cradling the Tagus River estuary that winds to the Atlantic Ocean and Cabo de Roca, the most westerly point of continental Europe. The area is stunning, its cliffs dotted with colorful hued villas and palaces, of which the 19th- Century Pena National Palace, known for its whimsical design and awesome views, has become the iconic symbol for tourist brochures.

Sintra wears its status of being one of the wealthiest and most expensive municipalities in the country everywhere you look. It's boldly smothered in luxurious accommodations and an astounding number of historic villas, where in some instances they are "estates" with grand luscious gardens. Sintra has one of the largest expat communities in the Portuguese Riviera. From being a royal sanctuary to now the must-do side trip of staying in Lisbon, Sintra is a romantic fabled vision, in spite of its UNESCO World Heritage Listed heart of hustle and bustle that is usually over run by tourist hordes.

You can get to Sintra from Lisbon by train, bus, guided tour or by car, if you have hired one. If you go by a tour, hope that you will be driven through the stunning and densely treed Sintra-Cascais National Park, with its incredible lookout points along the way. The moment you arrive in Sintra, the jostling crowds will swallow you up, and trying to park a car in the narrow streets is more of a lucky draw to get a spot. Then, once you find a parking space, opening your car door without it being taken off its hinges, or you standing in the middle of the roadway without a bus barreling down on you, is a bit of a risky business.

Make sure you have comfy shoes on, as this is where you will be walking ad nauseam: uphill, upstairs, down hills and downstairs. Quaint shops line little alleys, and the quintessential tourist shops do a roaring trade. Cozy restaurants are burdened with too many patrons, pastry shops become battlefields, and the queue for cherry liqueur chocolate cups will be a bothersome annoyance, but well worth putting up with when you pop this little decadent treat in your mouth.

Vila de Sintra the township is old, think in eons or back to the Bronze Age and associated with historical names such as Octavius  (30 BC). It has been occupied by marauding hordes of Romans, Moors and Muslims, plus Christian armies isolated the city and the castle during the Reconquista. It has been squabbled over by crusaders, counts, kings and princes in bloody squirmishes and even donated under dubious 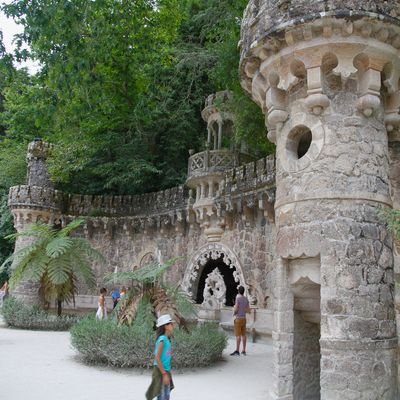 circumstances of a King's love for a lady.

Fortified walls, monasteries, palaces and convents were built over the years, whilst farms and vineyards flourished within its apron of fertile ground and the dense dark forest that the locals feared entering because of macabre myths and eclectic religious orders. Sintra in the late 19th and early 20th Centuries became a bohemian retreat for artists, writers, composers and musicians. Then followed the aristocrats and millionaires who sought refuge in the mountains from the summer heat, drawn to the magic of the city, with its exotic landscapes.

There are so many landmarks to gawk at that you feel like you are slowly turning the pages of a history book. From the medieval Castle of the Moors to the Portuguese Renaissance Sintra National Palace and the Pena National Palace, it is one jaw-dropping moment after another. It even entails scurrying down a deep winding staircase into a grotto where tip toeing across smooth hewn rocks sitting amidst bright lime algae-covered water is the only way out, unless you want the long climb back up the circular enclave.

At the end of the day, if you have time before heading back to Lisbon, check out the coastline of the national park, where fearless kite boarding surfers soar into the sky from the white tipped waves that crash on golden sand shores. Smothered in bronzed bodies, even here you will find historical remnants of fortified walls being battered by waves and ironically cloaked in deck chairs.

For those with very fat wallets, the Oceano hotel, with its panoramic views over the Atlantic Ocean and only 15 minutes from Sintra's centre, is definitely the place to spend a few stress-free days.

Savouring the City of San Sebastian