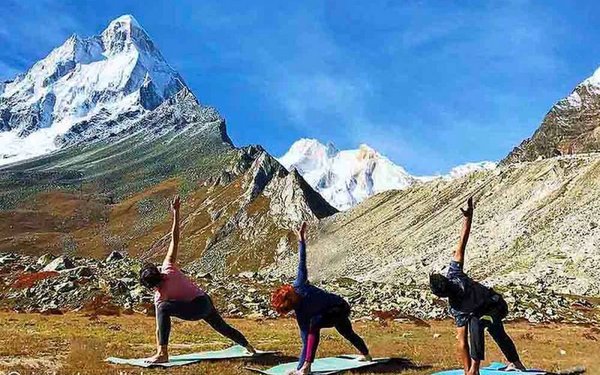 I was captivated by Tapovan. This stunning, off-the-beaten-path paradise, tucked away on the Himalayan border shared by India, Tibet and Nepal was truly Shangri-La. The legendary, high-alpine meadow welcomed us, bursting with colourful flora, meandering creeks, and highly adaptable blue-mountain sheep foraging on the lush tundra. Yet, the breath-taking tranquillity was eclipsed by the encircling uninhabitable, mountainous backdrop, where Mts. Shivling and Meru took centre stage, with Bhagirathi I, II, III to the left, opposite Sudarshan Parbat – all boasting intimidating granite and ice faces, as they soared to more than 6,700 m (22,770 ft). This incongruent paradox affirmed the delicate harmony between man and nature – leaving little wonder why babas, yogis and sadhus have chosen this sacred sanctuary for countless centuries for their year-round meditation retreats. 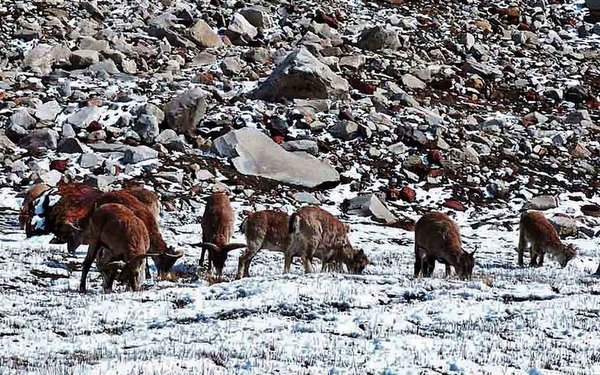 We would rest and acclimatise here for two-days – as a reward for that formidable, three-day ascent, chock-a-block with countless, inconceivable challenges – before forging ahead to Nandanvan and Vasuki Tal. Daybreak brought azure-blue, cloudless skies and unobstructed, jaw-dropping views. That morning, we luxuriated in soaking up the sunshine, practiced pranayama breathing to counter our oxygen deficit, and soothed our over-worked muscles with some alfresco yoga. Invigorated, we set off to check out Neel Taal, the blue pond renowned for its intense reflections of Meru and the Bhagirathi. After a two-hour scramble up a 60-degree slope, we gasped to discover that the recent landslides had obliterated the pool, filling the crater with a jumble of rubble.

Careful to not get anywhere near the wobbly edge that was still spewing avalanches of gravel into the abyss, we snaked our way along the ascending ridge to better eyeball Shivling – known as the Matterhorn of the East for its near-perfect, conical shape. It is a rare sight to fully view any mountain, which made Shivling enthralling to witness, showing off its pyramid, resembling a gigantic, pearly-white tooth. Popular with climbers around the world for its gruelling difficulty, it was fortuitous to meet an expedition ferrying loads from base camp to advanced stations for their upcoming summit attempt. 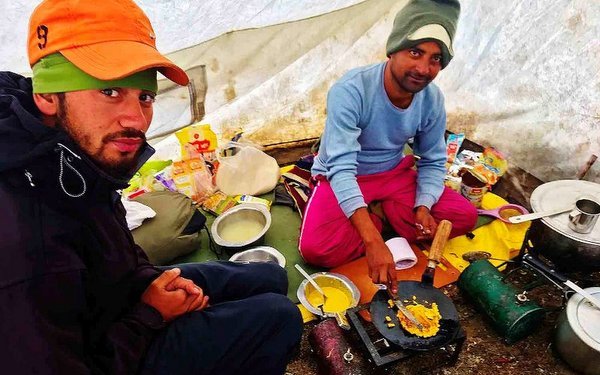 As we clambered onwards, we were able to catch an up-close frontal of Meru Parvat – with its glorious, expansive glacier – serving up a photographer’s dream come true. Though Meru was beckoning us, the winds began gusting, whilst dark, menacing clouds barrelled towards us, so it was time to hightail it out of there. The fastest way back was straight down the pitch, making mindful tracks through a hazardous boulder field. It was a sight for sore eyes to see the glow of the mess-tent oil lamps and tuck into a sumptuous Indian feast consisting of roti (Indian bread), sabzi (fried vegetables), sabji (vegetable curry), dal (lentils), mixed veggie pakora (fried fritters) and rice – whipped up by our modest chef in a bare-bones galley. As the night-time temperatures plummeted, I relished those toasty hot-water bottles.

I awoke inadvertently to a conspicuous stream of water running along my tent’s front seam. As I peeked outside, sure enough, everything was drenched in an incessant drizzle and obscured by thick fog. The trekking company’s ‘expedition-quality’ digs soon needed an emergency overhaul to cope with Mother Nature. Undeterred, we embarked on further exploring our playground with its numerous attractions. 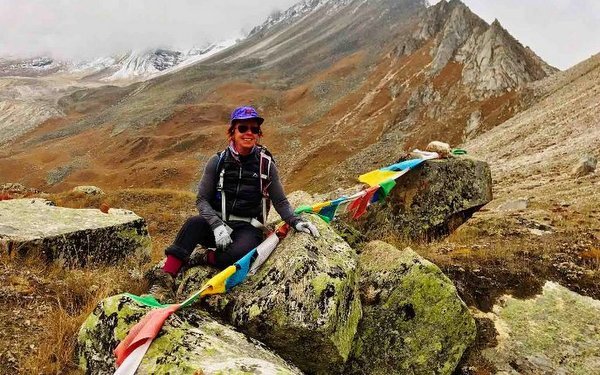 Traversing the boggy terrain proved tricky as it was super saturated, testing our navigational and footwork skills to stay on terra firma and avoid sinking into the camouflaged, underground brooks.

We struggled to make out Mt. Kedar Dome, a peak dominating the south side of Gaumukh Glacier, as it was swallowed by the mist. Unflinching, we persevered to survey Sundervan, ground zero for Bhagirathi 3 assaults; but it eluded us, playing hide and seek amidst the broken clouds. Finally, in quest of the third jewel in Tapovan’s crown, we tried to inspect the mighty Kirti Bamak glacier, a tributary that feeds into Gaumukh; yet, the pea-soup veil rendered that idea unfeasible, as well. Despite the curtailed vistas, the invisible, universal, interconnected web of energy vibrated powerfully in this isolated, exotic utopia. I felt blessed to tune into this expanded consciousness from such a remote hideaway, where so few dare to venture.

The next morning, our best-laid plans to head farther into the wilderness came to a crashing halt when we awake to a whiteout, demanding we hunker down and wait out the off-season snowstorm. Despite our best efforts to shovel snow off the tents, by mid-afternoon, it was undeniable we were losing the battle and the lightweight structures eventually collapsed – rendering us effectively homeless. 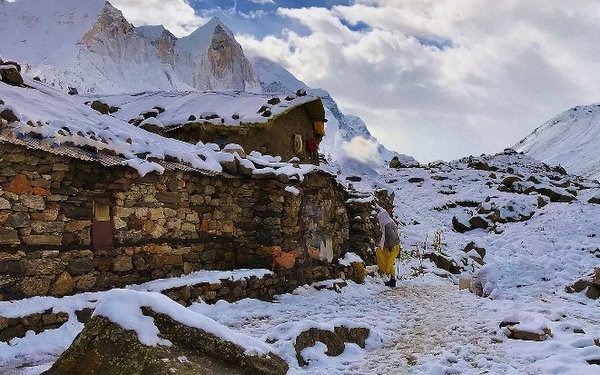 Not one to readily accept defeat, I was determined to find a way out of this tight spot and scout a dry sleeping nook in the barren wasteland. I had heard tales about an unearthly baba (wise, holy man), who had taken a vow of silence, whilst living in solitude, meditating somewhere in Tapovan. Surely, in this desolate outback, he had figured out how to winterise his digs. After some trudging around, we found him, and he humbly agreed we could stay with him. Surprisingly, his four-season accommodation was more like glamping than austere cave dwelling – complete with hand-stacked, stone walls, a make-shift roof and homey comforters on the ground. After schlepping our mats, sleeping bags and some food to his sacrosanct perch, I was convinced we would be protected, with the compassionate Mouni Baba meditating nearby. I nestled in to enjoy this winter wonderland as another chapter of my Himalayan escapades.

Waylaid at 4,463 m (14,640 ft), conditions deteriorated, and a strange phenomenon called thundersnow occurred. It was eerie to hear thunder bellowing overhead and watch the relentless white stuff accumulate. To me, the blizzard was otherworldly and calm; but my hiking partner did not share the vibe and her mounting panic required some intervention. Tapping into my years of yogic and meditative training, I lit some incense and asked her to chant with me. Sure enough, the anxiety relaxed its firm grip and serenity was restored. Regrettably, the peace was short-lived, and I was rattled from my blissful state anew by this woman’s shrieks. This time, the culprit was a tiny mouse that had sneaked in from the cold, searching – just like us– for a warm, dry abode. I will never forget the frenzy that ensued out of her unadulterated fear – reminding me that we, alone, are each responsible for taming our pesky minds. 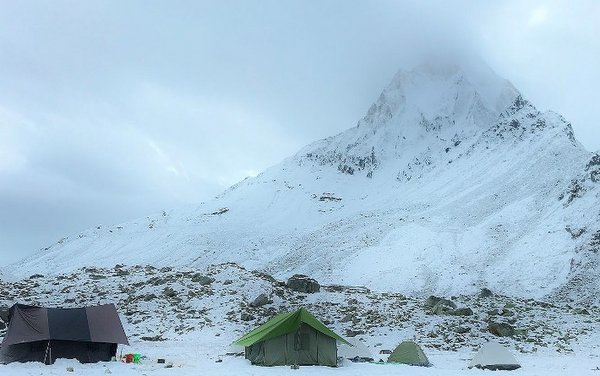 Dawn served up much improved skies and we held council to assess the situation. Our guide and porters decided our fate – Nandanvan and Vasuki Tal were off the menu and we were turning back. The rationale was conclusive: our over-rated tents had failed miserably and there was no Plan B for lodging in the hinterland; the weather was frighteningly unpredictable, and we had a fragile window to retrace our steps if we left right away; and my hiking partner had become unhinged by a mouse – not a good omen for venturing further into precarious environs! So, in a whirling dervish of activity, we broke camp with a single-minded mission for our safe return.

It is an age-old mountaineering truth: if climbing up was problematic, then getting down will likely be down-right risky. We had to first backtrack the unapologetically steep wall leading to Gaumukh, that was now uber slippery after two days of non-stop precipitation. It was daunting that the descent did not look anything like the route up. This time, the Akash Ganga was a waterfall tumbling down the embankment, which had been a mere trickle the other day. Then, the icefield flaunted fresh, gaping crevasses, with a brand-new topping of muck, making it simultaneously adrenaline-pumping and perilous. One step at a time, we had to manoeuvre a menagerie of turf, testing our physical strength and mental resolve – compounded by the battering wind and low-visibility fog. 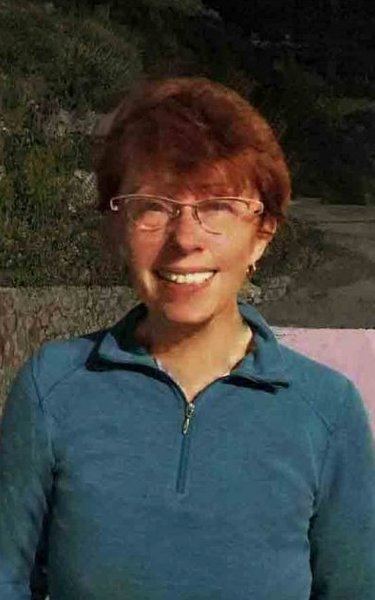 We had no choice but to re-enter the treacherous rockfall area, that had lengthened from one to three kilometres. It was nothing short of terrifying to eye the unstable landmass dubiously clinging to the cliff overhead, whilst moving at a breakneck pace to discount the glaring risk. Additionally, we had to contend with raging forces of water gushing down the crags, without the luxury of the slipshod bridges that had been annihilated. Once again, this trove of hazards, that each seemed insurmountable, became doable as our most gifted and trustworthy porters graciously guided us with their instinctive grit.

When we straggled into Gangotri two arduous days later, I was filled with immense gratitude. I had just completed this extraordinary, spiritual, blockbuster Himalayan adventure, thanks to my sense of wanderlust and courage to travel to such far-flung, foreign lands. I was appreciative for the opportunity to explore our planet’s natural grace and the rugged beauty of its tangle of mountains, rivers and glaciers. And, lastly, I was inspired by my inner strength and intuition to stay grounded in the face of perils and be present throughout this magical journey.

Do Your Research Before You Travel

Trekking Off the Beaten Path in the Indian Himalayas