Travelling Sri Lanka has long been considered the soft option for those looking for an alternative to the swarming human hot spot of India. The country that was once plagued by internal strife with the north being totally cut off from tourists, Sri Lanka today has new rail and road links, plus plenty of tourist options with a diverse array of eco-tourism holidays on offer, yoga retreats and iconic national parks to explore. It's a foodie's haven of curries to dribble down your chin, egg string hoppers to slurp, dahl and roti, curd with honey and the chance to survive on banana fritters or coconut pancakes dribbled in honey if that is your whim.

The landscape ranges from sundrenched wide beaches to ancient mystical sites of the UNESCO ilk. There is the ancient city of Sigiriya perched atop the mammoth Lion Rock, and Kandy that was home to the Sinhalese kings (1592-1815) is where you will find the Temple of the Tooth. Anuradhapura was the ancient capital of the country and is a sacred Buddhist enclave.

Polonnaruwa (think the 1st Century) with its Brahmanic remnants was the second capital. The fortified town of Galle from the 16th Century retains its thick ramparts, and the fishing market still happens on its foreshore, as it has done for eons.

The Dambulla Cave Temple will leave you gobsmacked when you see its incredible wall paintings and more than 150 statues standing guard around the temple. The Sinharaja Forest Reserve that is the last primary rainforest in the whole of Sri Lanka will let you peek at rare amphibians, chat to endemic primates such as the purple-faced leaf monkey or catch a glimpse of a leopard.

The Central Highlands include the area known as the Horton Plains National Park and the Knuckles Conservation Forest that beg to be hiked where you will find icy-cold waterholes to wallow in. Verdant green tea plantations grace sloping hills dotted with turbaned tea-pickers loaded down with large baskets on their backs. 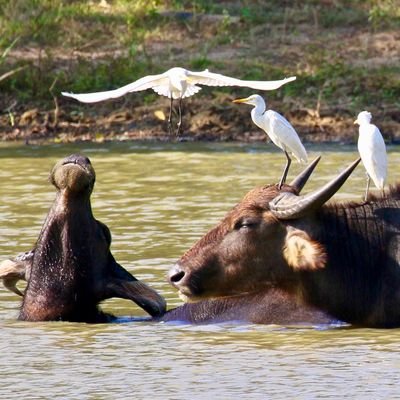 nka is nicknamed the "teardrop of India" or the "Pearl of the Indian Ocean" as apart from its "teardrop" island shape at the bottom of India, the country has a natural beauty that defies description, and its earth gives up precious gemstones such as sapphires and rubies. Despite being on the small side with an area of 65,610 km², it's home to 123 species of mammals, 227 types of birds, 178 reptiles, 122 species of amphibians, plus various other creatures both big and small. Exploring its national parks (Yala, Udawalawe or Wilpattu, to name a few) or a boat trip to see the whales cavorting in the water at Mirissa are memories in the making for wildlife lovers. Famous for its cinnamon and tea, Sri Lanka was once known as "Ceylon", and you can drink tea however you like it all the way around the island.

Called the land of "serendipity", the country's flag is one of the oldest in the world dating back to 162BC and is the only flag that represents different religious beliefs; Buddhism, Hinduism and Islam. It was the first country to have a female prime minister, when in 1960 Sirimavo Bandaranaike won the general election.

Sri Lanka has one of the highest literacy rates in the whole of South Asia, even though its locals shake their head when they agree, unlike westerners who nod up and down. This is where "hotel" may not necessarily "mean" accommodation, as cafes, bars and restaurants are also named "hotels".

Volleyball is the national sport of the country, although cricket is the most popular. It's home to the sweetest pineapples you will ever devour, and you must always remember to eat with your right hand, as the left is considered to be only used for "other" things. More than 100 waterfalls light up the country via hydropower plants, and it's home to the world's oldest human-planted tree (288BC) that sits in the ancient city of Anuradhapura named "Sri Maha Bodhiya". It's believed to be the Bodhi tree that Lord Buddha would sit under and meditate.

The civil war that has marred tourism in the country for the last 30 years ended in 2009. Since then Sri Lanka has bloomed as a tourist destination with the government predicting 2.5 million tourists to venture onto this incredible island by the end of this year. This forecast is a moot point today, as the tourism industry attempts to grapple with the consequences of the Easter bombings. Hotel bookings have plummeted and what was a US$4.4 billion industry that accounted for 5 percent of the country's GDP is on its knees with unprecedented cancellations of hotel accommodation and flights, as travellers fear further attacks.

The country remains on high alert at the time of writing this with the threat of imposed nighttime curfews happening at any time. Government travel websites around the world have listed the country as "reconsider your need to travel to", and travel insurance companies are listening to the warnings. Extra security measures have been put in place at Bandaranaike International Airport, and it's taking about four hours to get through the maze.

Acts of terrorism can happen anywhere in the world; Sri Lanka is not alone in their grief. Apart from the devastation caused by the lost lives, terrorism destroys country economies by waving red flags at potential tourists that impact not only on tour operators, flights and hotels but also many small enterprises that may be family run.

Should we shudder in our boots in fear or claim back our right to travel? This is an individual choice, and for many, it's predominantly based on whether you can get travel insurance to cover you for the destination.

Sri Lanka should not be left to struggle alone when it has so much to offer those that love to travel.

Read my tips to avoiding terrorism.

For the best personal tours and service in Sri Lanka I personally recommend: