It's all about the "Little Five", animal dung, and minding your safari manners.

The man who was before his time, in relation to African ecotourism, and who is credited with the title of the "Grandfather of Walking Safaris,” Norman Carr MBE (1912-1997) was the influential force behind setting up national parks in Malawi, Zambia, and Zimbabwe during the 1950s and the 1960s. 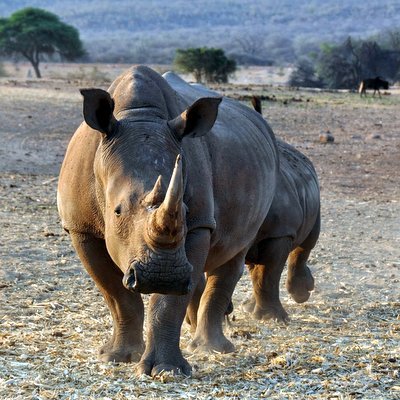 His extraordinary life included such feats as setting up his own safari company (which today is now known under the umbrella of Time + Tide), helping to establish the Rhino Trust in the 1970s, providing wildlife education to the local kids of the South Luangwa Valley and returning two lion cubs to the wild after giving them much love and attention. He broke the mold of game hunting of African wildlife and created conservation-based tourism.

Many game lodges today have more than one operation (bush camps) within walking distance of each other, for those that want to get up close and personal with the vast African bush around them. It's a totally different experience to that of playing animal voyeur, sitting in your six-seat jeep high off the ground. Walking gives you a unique perspective on the topography surrounding you, from the sunbaked, cracked earth under your feet to the sandy dry riverbeds that will give your leg muscles a workout and the squishy and muddy wetlands that threaten to swallow your boots.

Just like the normal safari drive, you set off in the wee hours of the morning when it's the best time for walking. The afternoons tend to be too warm, but it's still possible to take a stroll on the wild side at that hour of the day, if the heat doesn't bother you. It is a case of stripping clothes off as the day heats up, or in the case of late afternoon, the reverse, putting clothes on.

Most lodges will offer walking to a point where there will be a jeep waiting for you, so that you don't have to walk all the way back to the lodge. Or, the alternative is to stay a few nights at one bush camp and then to take off on foot for a leisurely "stroll" to the next bushcamp. At least you don't have to worry about your luggage, as a jeep will deliver it to your destination for you.

Make sure you wear clothes of bush colors (definitely not black, as it attracts the nasty, blood-thirsty tsetse flies) that you can layer, super comfy walking boots, plus a hat and sunglasses, Be sure to slap on a heap of sun repellent and bug spray, even if its dark when you leave. 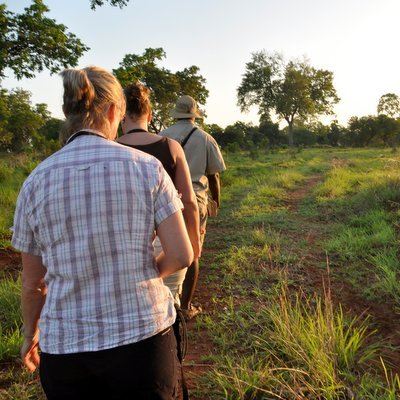 Walking through the African bush is no time for stupid antics, and it's when you definitely have to adhere to what your guide tells you to do. He'll give you a quick rundown on walking etiquette before you set off, such as walking in a single file so that you do not appear to be a threat to the wildlife. The scout walks first, then the lodge's guide followed by the guests, with the last person usually a staff member, jokingly referred to as the lion bait.

No excessive noise is to be made, no sudden movements, and you must always listen to your guide when confronted with what could be a dangerous situation. (In other words don't panic, turn tail and run, unless you are told to). You can't have a pee unless the tree has been "cleared" by the "guy with the gun" (aka the National Park scout), that is the man in the front.

Walking gives you a totally different experience in that your all of your senses come alive. You will quite often get dust up your nose and in your ears, you may trip over unexpected cracks in the earth, have quivers of nerves when walking through long grasses or snare yourself on thorny bushes, but it's worth it.

The crunching of leaves being trodden on will quite often be the only sound you will hear, and the heat will soon have you slurping from your water bottle. Remember, it's the polite thing to swipe the back of the person in front of you when a tsetse fly has the temerity to land, as the person behind you will hopefully return the favor for you.

A walking safari is when you will become obsessed with poo of the animal variety from whether the animal is male or female, herbivore or carnivore, if the female is in oestrus (aka "in heat"), if it's fresh or dry and whether the mound of dung is big enough to constitute a territorial marking. You will be thoroughly amazed at the various shapes and sizes of dung you come across, plus all the time you will be trying to dodge the assorted piles, whilst meandering along playing follow the leader.

A good guide will give you an impromptu lesson on how to track an animal, not just from its droppings, but from its footprints, taking into account the shape of the pad, the type of claws it may have and whether it was running with a predator after it or sedately walking, merely having a stroll through the bush. It's all about animal behaviour lesson 101, when your ears will become attuned to alarm calls being screeched by the baboons to the animals near you.

You will notice how the animals flee before you depending on their comfort zone, as they can actually feel the vibrations in the ground of your walking. You are an unknown quantity, because you are walking and not in a jeep.

This is when you are hoping to come across Africa's Little Five, instead of the Big Five, that you would be chasing in a jeep. This list includes the elephant shrew, the buffalo weaver, the leopard tortoise, the ant lion, and the rhino beetle. There is also the Ugly Five (hyena, wildebeest, vulture, warthog and the marabou stork), the type of creatures that only their mother would love, plus the Shy Five (the meerkat, the aardvark, the porcupine, the aardwolf and the bat-eared fox) that all come out to play at night, except for the meerkat, who likes his dose of sunshine.

Random areas of salt plains become puzzles of animals prints mixed up with smooth areas, where tongue lashings have relished the minerals, abandoned aardvark holes become the squatting domains of warthogs, bird nests cling to skeletal trees like Christmas decorations and even the bugs in the poo become an object of fascination. You may even come across that wretched female praying mantis that bites the male's head off during sex, if you are lucky.

Ideally, after a couple of hours of walking in the wilds, you will discover the true delight of downing coffee or tea and munching on a home baked biscuit, whilst watching baboons madly swinging through the trees above you.

NB:  No matter what bones you come across during your walk, it is illegal to take anything out of the national parks, even quills that the prickly porcupine may have dropped.

Pros and Cons for Using Social Media to Plan Your Trip

How to plan more ethical travels

Why Travelling is Good for Your Mental Health