The fun begins the moment you take a tentative step onto the flat barge to get across the expansive Zambezi River. Loaded up with various supplies, luggage and other adventurous souls, the poled pontoon does get you to the other side without being washed downriver or dunked in the water where crocodiles lurk. This is after the adrenalin rush of landing on a bush airstrip outside of the town of Sesheke to much amusement and big grins of the local village children.

The half hour drive to the river transfer point is an interesting insight into the locals' lives, their dusty village enclosures of conical shape roofed dwellings, plethora of scattering chickens and a highway that would rival any in the western world, that is more a people thoroughfare than a vehicle roadway.

Zambelozi Island Lodge is an astounding boutique resort where you definitely won't be tripping over people in what is after all a "fishing lodge" that has a huge dash of sophistication. It’s a remote and stunning setting from the moment you glimpse the staff patiently waiting on the other side of the gushing Zambezi. You could almost believe that you have arrived at the modern day version of the American television series "Fantasy Island", but there is no little "Tattoo" character crying out "da plane, da plane" or enigmatic white suited Mr Roarke showing up. 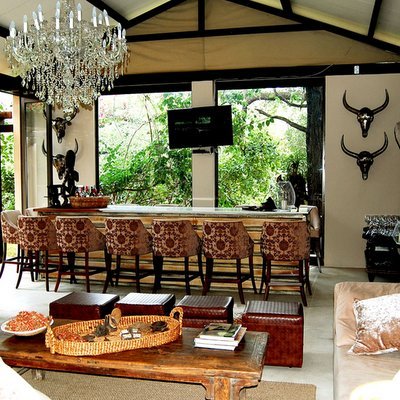 Zambelozi will have your jaw dropping from the moment you are welcomed into the main open-plan boma, with its stunning bar and lounge area, mammoth dining table and outdoor relaxing lounge enclave. The enclave gives way to a panoramic view over a lush sun-decked swimming pool following through to the river and its bush banks.

When you are over your gob-smack moment and take in the total surrounds, you will appreciate that Zambelozi is something extra special and could hardly be called a mere "fishing lodge" per se, as it oozes nonchalant elegance. The only give-away will be the fishing rods standing like sentinels on the patio, just in case you missed the plethora of boats moored at the riverbank on arrival.

Soaring ceilings and mammoth glassed doors that are fully screened allow the river vista to flow through over a wide wooden deck into your guest accommodation.  Contemporary and spacious, the avant-garde decor is eclectic with touches of bold African art.

Predominantly open-plan, the enormous ensuite, complete with massive bath tub and separate shower, also gives you the bathing alternative of showering outdoors, if you wish to commune with nature whilst soaping up the body. Villas have their own kitchens and dining areas, so it's possible to self-cater if you are into putting on an apron when on holidays, or if you have the delusion of being another Gordon Ramsey.

Folded sarongs adorn net draped daybeds for snoozing by the pool after a cooling dip, or if you wish to do a bit of sun worshipping, comfy reclining sun chairs give you masses of cushions to lay on. Spa treatments are available for the fishing widows who choose to pamper themselves rather than fling a rod incessantly into the water, splicing a finger on a hook or inadvertently scouring the face of your partner as you attempt a lame casting action.

When the urge to stretch the legs take over, you can take a trek with a picnic, if you are so inclined, to gawk at the grove of ancient baobab trees. Guides are available and will happily chat away about local life and the plants you may have to dodge.

If elephants have decided to walk across the river at low tide, you will definitely need to have a guide with you, as coming across a lumbering behemoth may cause your heart to do a little fluttering dance of anxiety or give your knees a case of the shakes.  If you are into a bit of bird watching, there are plenty of feathery fluttering creatures to be admired, from trumpeter hornbills to half-collared kingfishers, as well as schalow turacos and black collared barbets making appearances.

Sundowners can be had cruising the river as the daylight melds into a golden glow, and the locals hang out doing their own thing, bathing and washing on the riverbanks as they have done for eons. You will see glimpses of their huts and rustic agricultural efforts melding into the long grasses. Babies are swaddled on mothers' backs, and big grins break out on kids' faces as you slowly meander along the river. Every shade of green that you can imagine flows through to blushing pinks of the bush on the land, whilst banks of river reeds create brilliant reflections in the water.

If you wish to keep your feet planted on terra firma, an amazing outdoor lounging area with masses of scattered cushions and a fire pit is set up on a jutting headland overlooking the river, not far from the lodge. If you are lucky, it's here that you may be able to spy hippos lolling about, or the clawless otter playing in reckless abandonment in the rapids.

For those into fishing, Zambelozi is where you can get delirious and shake with excitement at the mere thought of landing a massive tiger fish. This predator of legendary proportions with razor sharp teeth is probably the fiercest fish in the Zambezi. The stretch of the Zambezi River around Zambelozi is literally jumping with fish, as it is a restricted area that no other fishing boats can use due to a rather large downstream rapid.

You can stand on the island banks and simply throw out your line, fish the incredible Ngonye Falls whilst standing on rocks, or jump into one of the boats with a knowledgeable fishing guide to explore the fish-rich waters. The elusive tiger fish that can get as big as 20lbs may be the crowning glory that grabs your lure, but plenty of other species are swimming around. They include extraordinarily large catfish, threespot tilapia and numerous species of bream—think thinface, largemouth, humpback, pink, and the predatory "nembwe" lurking beneath the Zambezi's surface.

Zambelozi is a veritable playground for those into fishing, where you can tell as many big fishy tales at the end of the day as drinks that you may indulge in. For the fishing widow, it is a pampering space of total self-indulgence in the wild where you don't have to sacrifice any luxury at all, or put up with any fishy whiffs or slimy scales.

As an adjunct to your adventure, when you depart Zambelozi, you could always do a buzz around Victoria Falls, if your private plane can arrange it with the necessary authorities, just to add a little bit more spice to your African adventure.